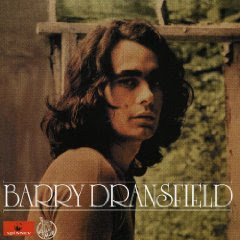 There is a lot of music out there, far more than even the most dedicated fan can take in. That inevitably means that good and sometimes great music goes unheard and unrecognized.

Take the case of one Barry Dransfield. I knew Barry’s name. I had read of his music here and there, probably in Dirty Linen, the kind of niche music rag that focused on English hippies who played the traditional music of their forefathers. I even owned a bit of his music. Barry’s grinning visage stares out from under a top hat on the cover of Richard Thompson’s 1972 obscurity Morris On, a collection of bizarre little dance tunes and in-jokes so distinctly British that they are utterly baffling to anyone not well versed in 16th century rustic English culture. That would be me, for one. So much for Barry Dransfield.

That is, until a couple weeks ago. I’ve been listening to a 4-CD box set called The Acoustic Folk Box, a surprisingly generic name for a compilation that is, essentially, a bunch of English hippies playing the traditional music of their forefathers. And there was Barry Dransfield again, this time playing and singing with his brother Robin. Their particular contribution is a song called “The Rout of the Blues,” which has nothing to do with feeling happy, and everything to do with an early 18th century tale of the muster of British soldiers. Their singing was so stirring, their sibling harmonies so bracing, that I needed to hear more.

And so the past few weeks have been devoted to hunting down music that is old, very obscure, and absolutely wondrous. Most of Barry’s and Robin’s music is long out of print, so my first discovery was the 1997 2-CD compilation Up to Now, which assembles a goodly portion of the brothers’ recorded output. In true sibling fashion, Barry and Robin didn’t always get along very well, and so there are multi-year gaps in their catalogue. But this 2-CD set is a superb summation of why they mattered, and matter. Most of this material was recorded in the late ‘60s and early ‘70s, but these songs – both originals and trad covers – sound fresh, and the harmony singing is revelatory, and elicits the kind of sparks that only great brother duos such as The Everlys and The Louvins achieved before them.

Barry recorded solo albums in the long interims between gigs with Robin, and his eponymous solo debut from 1972 remains one of the great milestones of the trad revival. At one time Barry Dransfield had the distinction of being labeled the “rarest folk album,” and fanatical, aging English hippies paid upwards of 400 pounds for the privilege of owning a vinyl version. It has since been re-released on CD, and if it’s not worth 400 pounds, it is surely worth the $20 I paid for it in a local used music store. I suspect I got a bargain. It’s still going for over $50 on Amazon.com. In any case, it’s a perfect trad folk album, split equally between lusty singing on the covers of ancient tunes and sprightly instrumental jigs and reels (Barry is a world-class fiddler).

Fast forward a couple decades. Barry retired from performing in the ‘80s and set up shop as the proprietor of a violin and cello restoration business in his native Hastings. Aside from occasional work scoring television shows and films, infrequent gigs with Robin, and a brief but memorable appearance as a blind fiddler opposite Mel Gibson, Daniel Day-Lewis, and Anthony Hopkins in The Bounty, the era of Barry Dransfield, Folksinger appeared to be at an end.

Which makes his two late-career albums all the more delightful. There’s music I’m missing in between, so I can’t really comment on his entire career, but the ‘00s were a very good musical decade indeed. Wings of the Sphinx and Unruly – both recorded during the past ten years – show absolutely no diminishment of vocal powers, and, if anything, a more nuanced and impressive instrumental prowess.

I’m especially enamored by the warmth of the singing and the dexterity of the fiddle and guitar work. Many trad folk revivalists come off as a bit studied and reverent, caretakers rather than the embodiment of the men and women who had to face the prospect of Johnny marching off with King George, or Napoleon laying waste to half of Europe. Barry Dransfield remembers flesh. And blood. He’s a marvelous, soulful singer, and I’ve experienced the same pleasure in hearing his voice that I encountered when I first heard Richard Thompson or Sandy Denny.

I love it when this happens. Several decades after the fact, old music has been made new. Those are the best kinds of surprises.
Posted by Andy Whitman at 1:58 PM

Did you happen to find any recordings featuring the third Dransfield brother, Maurice?

i'm really enjoying your blog. i looked around for an email but couldn't find one. wanted to thank you for the kind words you've written about me in the past and make sure you had my new record. if you don't have one and want one, please drop me a line at heartofadog[at]gmail.com. i'd be happy to hear from you.

i'm really enjoying your blog. i looked around for an email but couldn't find one. wanted to thank you for the kind words you've written about me in the past and make sure you had my new record. if you don't have one and want one, please drop me a line at heartofadog[at]gmail.com. i'd be happy to hear from you.

Martin, no sign of Maurice, but I understand that the fourth Dransfield brother, Andy, had a notable career as a teenage heartthrob before his untimely death.