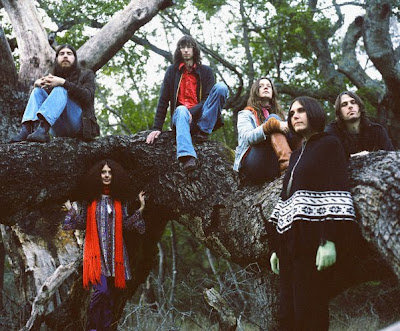 Is anyone else inordinately fond of this Philly psych/folk sextet? As a longtime fan of early Fairport Convention, Pentangle, and Strawbs, I have to say that the two albums I've heard (II and III: Roman numerals, lads; how much more early '70s retro can it get?) are lovely, haunting, and disturbing, and are quite worthy successors to albums such as Liege and Lief and Cruel Sister.

Meg Baird fills the Sandy Denny/Jacqui McShee folk thrush role quite admirably, and the instrumental interplay between acoustic and overdriven electric guitars and cellos reminds me of the folk/blues/Renaissance/middle Eastern/jazz impossibility of categorizing Pentangle. Whatever you call it, it's beautiful. And this well is deep. The more I listen, the more I hear, and new sounds open up every time I pay attention. It's much like jazz in that way.
Posted by Andy Whitman at 10:44 AM

Somehow this lot slipped beneath my folk/rock radar, way back when and ever since. I'll go in further search.

In July '08 you posted about Ed Askew. I was present at an extraordinary private concert he gave during a short visit to the UK. He was staying in Blackheath, London, with artist friends Victor Burgin and Michael Craig-Martin, the former being my landlord. In fact, Ed was scheduled to work up some numbers with my band of the time, but he returned to the States before we could organise things. I'm currently preparing a post - part of a series of autobiographical fragments - which will centre on the performance.