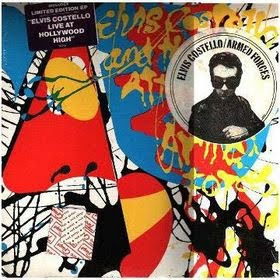 I remember the Live at Hollywood High EP. It fell out of the record slip, and I wasn't expecting it. I had bought Elvis Costello's 1979 release Armed Forces, and expected to find a new vinyl album inside, which I did. But as an unexpected little bonus there was a 7" EP hidden away in the packaging. That little EP contained three songs -- "Alison," "Accidents Will Happen," and "Watching the Detectives" -- all recorded live at some place purportedly called Hollywood High. I didn't believe it was a real high school. But those pubescent co-eds surely sounded like they were having a good time anyway. And why not? It was a short, 12-minute blast of the Angry Young Man at the peak of his powers.

Those three songs, along with 17 others recorded at the same time, have now been released as Live at Hollywood High, the second installment of Costello's Archives series. Like the Live at The El Mocambo set, often bootlegged but officially released only a couple years ago, the setlist leans heavily on the first two classic albums, My Aim Is True and This Year's Model. And like that set, there's an appealing to-hell-with-it looseness and raucousness about the proceeedings, a barely controlled hour-long careen from great song to great song. Listening to it, you remember why, on the right night, Elvis Costello and the Attractions could be the best live rock 'n roll band in the world.

Is it essential music? Nope, not if you already own Live at The El Mocambo. The setlists and performances aren't appreciably different, although that solo piano version of "Accidents Will Happen" is still a nice touch, just as it was back in 1979. But every serious rock 'n roll fan needs to own at least one vintage slice of live Costello in his prime. Take your pick. If you don't already own Live at The El Mocambo, this one will do quite nicely.
Posted by Andy Whitman at 10:48 AM

Yes Virginia, there is a Hollywood High, and they have a nice auditorium there where this show was performed and recorded. I know, I was there, and it was a hell of a performance to witness. Not sure how many pre-pubescent high-schoolers were there--this wasn't the TAMI show--but there were a lot of LA punk scene folks and more mainstream folks such as Linda Rhonstadt. Mink DeVille and Rockpile opened, and I'd love to have those sets on record, too.

When I bought Armed Forces, I had the same surprise when that EP fell out as you did, then likely a bit more when I saw what it was.

Finally, during my years in LA, that's the only concert I was aware of (and I was on top of who was playing where) ever staged at Hollywood High.

Thanks for the memories, Londog. It's a wonderful album, and I have no doubt that it was a hell of a concert to witness.

I saw Costello at roughly the same time, in Columbus, Ohio. He was abysmal. He was drunk, played a sloppy 45-minute set, and then went on later that night to insult Ray Charles. It might have been the most infamous night of his career. But on any given night -- and that concert at Hollywood High shows it -- he and The Attractions could be brilliant.

More Hollywood High lore...missed the show but loved the EP as I listened to it during my Hollywood High years 79-82. The funny postcript is that in 1982, the Go Gos tried to play at Hollywood High to record a concert and TV show, and the principal did not permit it because the people at the Costello show had supposedly trashed the auditorium.

Was at the show. I don't remember any trashing of the auditorium. It was a pretty normal concert crowd.