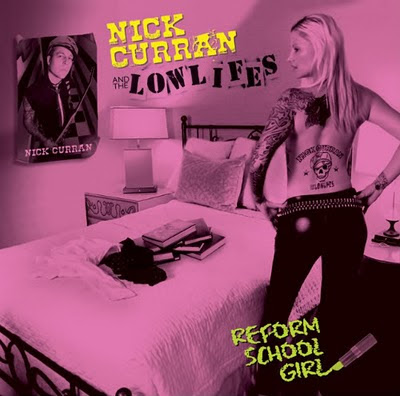 Nick Curran has been around for a long time, making soulful garage rock and rockabilly that almost nobody hears. His latest album Reform School Girl, out February 16th on Electro Groove Records, doesn't vary the tried-and-true formula much, so there's nothing to suggest that this will be a breakout album. But it surely captures everything that made the kids go crazy fifty years ago. The great critic Greil Marcus once described Bruce Springsteen's song "Born to Run" as a "'57 Chevy running on melted down Crystals records," and there's a similar sound at work on Curran's album. Any one of these fourteen tracks could have been a hit single in the early days of rock 'n roll, and would have sounded fabulous blasting out over a cheap transistor radio.

The problem, of course, is that it's now 2010, and Little Richard doesn't really sell, no matter how accurately you imitate him. So Nick can probably kiss the Platinum record dream goodbye. I suspect he's not particulary worried about it. He's made a red-hot revival record, thirty years after The Stray Cats revived the '70s rockabilly of Robert Gordon, which itself was a revival of Elvis and Chuck and Little Richard. You can view it as an old and tired formula if you want. I prefer to see it as further evidence that some sounds never really get old, that a good, raw, unpolished rock 'n roll raveup will always be welcome news, daddy-o.
Posted by Andy Whitman at 11:07 AM

"I prefer to see it as further evidence that some sounds never really get old."

Indeed -- well-done rockabilly will set toes tapping for anyone who has ears to hear...

It should be no surprise to you that I agree wholeheartedly.