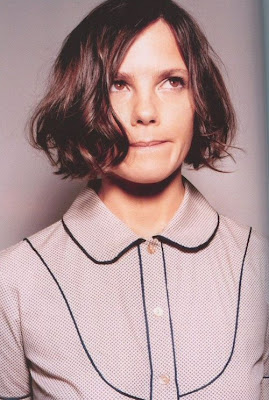 When you employ Tibetan singing bowl as a lead instrument, and when your drumming makes Meg White sound like Art Blakey, there is a chance that you will never duet with Beyonce on the Grammy Awards. So don’t look for Scout Niblett to show up on your TV screen anytime soon.

In a world where “weird” is defined as smearing your face with eyeshadow (see Lady Gaga on the aforementioned Grammy Awards for reference), Scout Niblett is a whole different kind of weird. For lack of a better label, think of her as Sad Weird. Or maybe just Sad. When she isn't wearing one of her cheap, gaudy wigs (okay, that in itself is odd), Scout looks relatively normal; the girl-next-door waif who could be working behind the counter at 7-11 in an alternative life. But then she opens her mouth:

Why would you think that you make me drink?
I'm a drunk, reasons I don't need
Just like you
And I'd be in my car if I weren't in this bar
Taking pills
Take my keys
I might drive me to Mexico

When you accompany that with an overdriven electric guitar and an off-key banshee wail, you end up with a sort of Grunge Dark Night of the Soul, and the resulting philosophical and musical tsunami can leave you breathless. Think too much about it, and it might actually keep you awake at night.

Scout’s latest album is called The Calcination of Scout Niblett, “calcination” in this case referring to the chemical process by which metals are refined and purified. Yes, there are spiritual overtones to the metaphor, and Scout plunges headfirst into the fray, engaging in the kind of incriminating self doubt and confessional malaise that has characterized poetic navel gazers from Joni Mitchell to Jolie Holland. But there's nothing pretty or precious about the music. What it sounds like is a suicide note from a Mississippi Delta juke joint, distorted guitar crackling through a cheap amp, and it's a uniquely and sadly harrowing listening experience.

I don't like this album. But I can't stop listening to it. It's the musical equivalent of driving by a six-car pileup on the freeway.

Perhaps there's hope. I would like to think so. There is, for instance, this:

Welcome to my self-made sweat box
This is where I take it all off
I've got to sweat it out,
I'll cook those monsters out
I'm not coming out of here until my soul appears

However long it takes, babe. Just come out.

The rawness of the music fully matches the rawness of the words. "Cherry Cheek Bomb" starts with a proto-Led-Zep guitar riff that is equal parts Jimmy Page and Son House. On the epic finale "Meet and Greet," an incredibly weary recapitulation of life on the road, night after night, Scout recounts meeting a fan who asks, "Hey, when you gonna learn to play that thing?". She answers the question with a guitar solo that doesn't so much build as erupt, a great, squalling splat of noise that serves as a giant Fuck You to the world. I can only hope that it isn't meant too literally. This woman needs to keep making music, and you need to hear her.
Posted by Andy Whitman at 10:03 AM