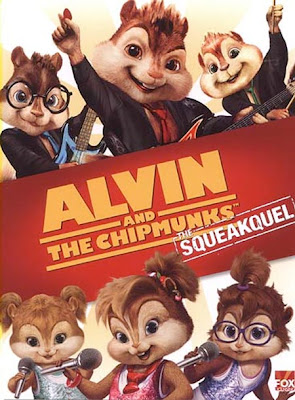 It's award season again. And so I'm wondering. This is really a question for people who are both music fanatics and movie fanatics; more specifically, music snobs and movie snobs. I know you're out there. Represent.

There is a certain contingent of music fans -- let's call them "discerning" as a convenient and/or infuriating label -- who don't bother with the Grammy Awards. They know that there's really nothing to see, or hear, and that the so-called "best" music that wins the flashy awards is nothing but the big-label fat cats congratulating themselves on an increasingly irrelevant phenomenon. The movie equivalent would be films such as The Chipmunks: The Squeakquel winning Oscar after Oscar.

In truth, the Grammys do recognize some worthwhile music. But those are the smalltime awards for categories such as Best Traditional Blues Album and Best Boxed or Limited Edition Package. By the time we hit the big Sir Elton John/Lady Gaga duets at 8:00, those awards are long past.

So my question, for you movie snobs, is whether you view the Oscars in a similar way. Do the Oscars represent the artistic pinnacle of moviemaking? Do they reward worthy films? Are they a waste of time? Somewhere in between?

My guess is that true film buffs view the Oscars a little more kindly than music snobs view the Grammys, primarily because there are fewer films on which to focus, and it's a little more difficult for truly worthwhile films to pass under the radar. But I could be wrong. I'd like to hear from you.
Posted by Andy Whitman at 10:02 AM

I watched this year's Grammys and was struck by the excess and the noise. Every song had to have a large, bombastic production complete with a 'surprise' duet. If everything is the biggest and best ever, then nothing is. The best part was Jeff Beck and Imedla May, who I had never heard of. Short, sweet, and to the point.

I'm a fan of the Oscars and watch every year. As you said, the field is narrower. While films and actors do fall through the cracks, the academy gets more of it right more often than not. Part of the fun is the argument. Arguing about the grammys gives me little pleasure. Karen O. got dissed for best original song, Nick Hornby got a nomination, I'd rather talk about that than what Lady Gaga was wearing.

If I don't catch the Grammy's, like I didn't this year, I don't really care. Once I started tuning in and saying, "Huh, who is that?" I realized I had "matured" beyond enjoying the event.

We do, however, make an "event" out of the Oscars. My hubby and I try to see every film in the main categories...which can be quite a feat. We watched the Academy Awards on our honeymoon...and it just stuck I guess.

Having said that...we are most aware that it is more like a political campaign and less a purely artistic vote. I have yet to hear a decent explanation for why the only films that ever get nominated are the ones that haven't even hit theaters in the Midwest. In fact I was SHOCKED (but encouraged) to see that The Hurt Locker was up for Best Picture...I saw it 8 months ago! Overall, I just don't think there are many movies being made that really utilize the powerful medium. The last two movies I saw that really rocked me were Crash and then nothing until The Reader. This year there are 10 nominations, which seems a bit excessive and I can't really believe they are all that equal. Up in the Air? A good movie, but not in the ranks of past Oscar winners. Plus now I have 6 more to view before March 7!!!

I don't own a television so I don't watch either but wouldn't watch even if I could.

I am marginally interested in finding out the results of the Oscars and sometimes make choices about what to watch on Netflix based on the nominations. The Grammy awards - not so much.

I agree with the first commenter (Andy, I think). The Grammys came off as mostly carnival (dancing stereos - Black Eyed Peas?), and I didn't enjoy most of it. Jeff Beck was great, and the America quartet at the beginning of the (forget the name of the country group) song was good. After hearing Taylor Swift sing live, I couldn't believe she was such a celebrated talent. I was not impressed.

Oh - I like movies, but I don't usually watch the Oscars.

I'm representing: I'm a music and movie snob. I like popular stuff too, but maybe in too ironic of a way to pass as a non-snob. But in reading these comments and your post, I just realized can stomach the Oscars more than the Grammy's. What's up with that? On NPR yesterday, their "movie guy" said it best, he doesn't even bother getting upset about what's missing from the Oscars because he doesn't expect much anyways; they've never represented the best. Maybe I can watch it because I'm used to watching actors talk? or at least holding my attention? Maybe it's because I DO have other festivals/awards I look to for true barometers: Sundance, Cannes, Toronto... and lots more. When I feel like the best movies are at least getting recognition somewhere, I can better handle seeing the twitty Julie and Julia nominations. What's the alternative to the Grammy's?

I've viewed the grammy's as a joke for a while, but I always felt like the Oscar's were pretty solid for the most part. I didn't necessarily agree with them, but if there were really good movies that didn't necessarily make a lot of money, they were still recognized.

However, with the expansion to 10 best films now, I kind of feel like the Oscars are going the way of the grammy's big time.

I started skipping the Oscars three or four years ago. I don't really need the parade of plastic faces, fancy duds, or big money to tell me what I already know: most Hollywood flicks are barely average and Oscar-voters love to reward social-message films to assuage their guilt.

The Oscars are mostly a waste of time. And that comment is coming from one who actually watches them (or used to) most of the time. However, the critics I tend to read now feel that the Oscars are simply exactly what you described well, Andy: Backslapping/backpatting producers each giving their own projects a boost/accolades. I am guessing that the wasteland of film award season is better than the music award season, with Hurt Locker and so on - but they're awfully similar in terms of overall quality for the "big" awards.