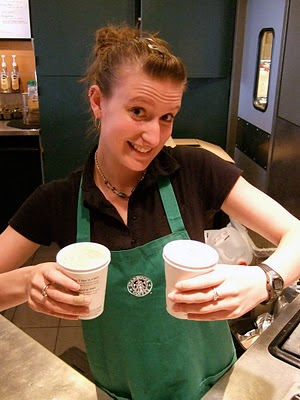 On Saturday I’ll be participating in a panel discussion at Ohio University, meeting with the journalism students who want to pursue a career in music writing. I’ll try not to roll my eyes at them. They’ll try not to roll their eyes at me, a Dick-Cheney-like being who fancies himself semi-hip, even with a hearing aid. We are all deluded. I’ll probably be polite and encouraging. God knows the poor, deluded kids need all the encouragement they can get, with their bleak decades of barista duty at Starbucks still ahead of them. So I probably won’t say any of this. But here’s what I’d like to say.

You will earn more money by creatively mouthing the words “Would you like fries with that?” than you will as a music critic. If you are pursuing a career in music journalism thinking that you will actually have a career in music journalism, think again. You probably will not. You might get lucky, but the odds are heavily stacked against you. Approximately 8 people in the world have careers in music journalism. Usually they run their own magazines or websites. Usually they are poor, but they manage to get by. The rest of you will do something else to earn money. You might want to think about what that will be.

I don’t want to discourage you. There is such a thing as a big break. Some of you may actually write for well-known magazines or websites some day. And that’s wonderful. But there is no money. There is less and less money every day, and the people who control the money in our society tend to think of music writing as equivalent to typing. It’s just moving your fingers. You will earn more money by moving your fingers over the Latte and Mocha buttons at Starbucks.

There are other advantages. As a music writer you will receive a lot of free music. On the other hand, most of you have probably figured out that you can receive a lot of free music whenever you want, regardless of your career path. If that’s not enough of an incentive, know that you will also receive free tickets to concerts, occasional backstage passes, and access to some of your favorite musicians and bands. And that’s all great fun. But without a backup plan, you will be having great fun in your parents’ basement when you are 30 years old.

That’s the truth. So figure out another way to earn money.

That said, I want to encourage you to write about music. But only if you love music, and if you love writing. If you can’t help yourself, then have at it. Music writing will be a source of great joy. Many days you will feel fulfilled, knowing that you’re doing what you’re supposed to do. Occasionally you will have those ecstatic moments where you know, without a shadow of a doubt, that you’ve nailed it, that you’ve said something as well as it can possibly be said. And most days it will just feel like work, and it will be hard, but do it anyway, because it’s what you’re supposed to do. If that’s you – if you recognize yourself in that description – then write about music. Write about what you love, and don’t worry about the compensation. You’ll probably be doing it at inconvenient times – when you’re already worn out from your so-called “real” job, when you’re tired, during evenings, on weekends – and you’ll never regret it.

Bitter? Maybe a little. But happy, too. I get to do what I love, and some people care about that. Not everyone can say that. And the only Java I’m dealing with these days is a programming language. It doesn’t taste as good, but it pays better than Starbucks.
Posted by Andy Whitman at 11:15 AM

I really think you should read this letter on Saturday...

Andy, how can I attend one of your discussions with journalism students? I haven't been a student for 15 years - I'm a veteran music writer in West Virginia who's currently out of work - but I'm an admirer of your writing and would love to hear your perspective on how to get work at the few music mags still alive - or, probably a more difficult subject, on how to improve my music writing. Do you ever give lectures/discussions/panels for non-students? Ever come to WV?

Gibra, I do occasionally speak at colleges/universities. I have no idea if or when I'll be in WV. But Athens, Ohio, where I'll be Saturday, is only thirty miles or so from Parkersburg. I don't know where you're located in WV, but I'm sure you'd be welcome at OU. The panel discussion is supposed to happen at 5:00 p.m. somewhere in the Ohio University student union (Baker Center). Hope to see you there.

Here's two votes for you to read them your letter. The truth hurts but it's still good for you.

It also strikes me as a good reality check for young, aspiring musician/singer/songwriters.

yeah, i agree that you could insert "working musician/songwriter" into the letter and it would be the same thing i would say to young drummers and singers.

i guess that is ironic?

Thanks for the reply, Andy. I'll be at my "other job" (as a corporate writer) this Saturday. But I'm only an hour east of Parkersburg, so maybe I can make one of your future panels. How can I stay apprised of your appearances?

In general, does anyone here know if there are any resources to help professional music writers - those already in the business - improve their work? Are there any "critiquing" services out there? There's gotta be some reason the mags I want to write for (Paste, Blurt, etc.) don't seem interested in me.

I love that you squash the dreams, but then end on the positive, hopeful note. It's kind of like what I said to my kid as he went off to college. He works as a bartender right now.