The Trouble with Humans 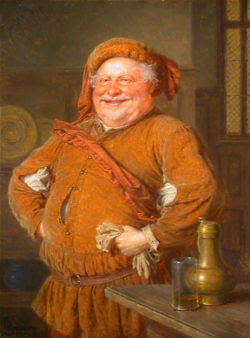 I’m in a misanthropic mood. This is because people suck. Not all of them, but enough of them to poison the general bonhomie and joie de vivre and other French terms that normally characterize my lobotomized, chuckleheaded life.

Look at that oaf. He could be me. He is fat, bald, and oblivious to fashion. He appears to be wearing a pheasant on his head. I wish I could be like him. But I'm not.

Instead, I harbor grudges. I plot witty putdowns of e-assholes I've never met, and whose words I encounter in various Internet discussion lists. Yeah, Paris Hilton and Barack Obama are a lot alike. Let's see, one of them is a spoiled, rich heiress best known for a porn video and her non-stop party lifestyle, and the other one is a poor kid from a broken home who graduated from Harvard Law School, was the first black president of the Harvard Law Review, a law professor at the ripe old age of 30, a state legislator at 36, and a U.S. senator at 43. Hard to tell 'em apart. Assholes. I also wonder if I should talk to my doctor about anti-depressants. This is because I suck, too.

All I know is that I've survived on three or four hours of sleep for too many nights in a row, that I wake up dispirited, and that the day tends to go downhill from there. I know that right now I can't stand being a parent, or a corporate American, or a Christian. I love Jesus. I just can't stand the people who claim to follow Him. They're all immensely disappointing. These are all areas where people could be helpful. And they're all areas of stress. The people in those areas either drain me of the little emotional reserves I have, or they're non-existent. "I'm Not There" isn't just the title of a recent movie about Bob Dylan.

“Don’t say nothin’.” That’s the way Chip and Carrie conclude their song. And they’re probably right. But my mouth has gotten me into trouble all my life, and my e-mouth might as well join in the hilarity. I'll probably be better after a good night's sleep, whatever month that might happen. In the meantime, people suck. And trouble does seem to be at hand.
Posted by Andy Whitman at 2:04 PM

I know exactly how it feels. For some reason, August just keeps getting "better and better."

I've found that Psalm 4 is pretty awesome consolation in times like these. Try it out before bed tonight, if you like. :-)

I hope a couple saints show up soon for you.

"But my mouth has gotten me into trouble all my life"

You and me both. And my eMouth is even worse.

Andy, as a start, you need to take the same vow I made four years ago: "I will not discuss politics online. No good can come of it." I still state my opinion on my personal website from time to time, but, otherwise, I've stuck to that promise, and I'm a happier, healthier -- and no less well-informed or politically engaged -- person for it.

Also, you're old enough and wise enough to be able to spot the assholes online. Stop poking them with sticks. They like it.

"E-asshole"? In this case, I'd say that among your many talents, Andy, you are a master of understatement.

You do need sleep.
It's ok.

I get a monthly extended family email from my cousin, since her mother passed away two years ago. Early on, it featured quotes of her mother's favorite sayings. One was, "Jesus saw this happening, and He said it would be ok." It's simple, but it's got me through some things.

sleep my friend. been in that state too many times in my life. just get some sleep. it makes the idiots in this world a lot less bothersome.

i know from reading you are in a bad spot right now with family. find some rest in their and take care of yourself as well. you aren't worth anything to anyone if you don't rest a bit.

still thinking of and praying for you and your family often.

I like the way you weave your words . There is something about how they come together that is so brilliantly fluid. There is mood and nuance and wit all intertwined. And I have silently enjoyed all of it over the few months since I discovered your blog.

I thought I would pop in my two cents today since you sound quite blue, to let you know, that even in the throes of misanthropy, you are a pretty amazing writer.

Oh and I'm gonna quote you on the 'I love Jesus. I just can't stand those that claim to follow him' - I know exactly what you mean.