Ezra Furman and the Harpoons -- Inside the Human Body 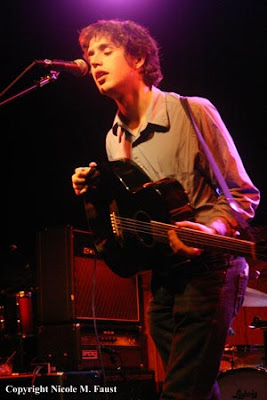 My favorite album of 2007 was a raw, beautiful and alarming little gem called Banging Down the Doors, by Boston band Ezra Furman and the Harpoons. So, perhaps not surprisingly, my most anticipated album this year is Ezra's followup, entitled Inside the Human Body, which will be released on Minty Fresh Records on October 7th.

I'll be writing a detailed review for Paste's October issue. In the meantime, you can catch a preview right here.

Here's what Ezra has to say:

The last record had a song called “My Soul Has Escaped From My Body.” I feel that every song on this record could have that title. The album is about your soul busting outta your chest--how our humanity cannot be suppressed, and how that which is inside cannot be kept inside. That's how I've always felt about being human.

We present to you, then, our new record about being a human being, even when the world tries to turn you into a monster. I really hope you like these songs about the secret things that wait inside us to be released, and about the triumph of the human spirit. We gave it all we've got.

And he does. I need to spend much, much more time with this music, but after one listen, I can tell you that this is why I stay up far too late listening to music. It's the only time I can fit it in my day. But I can't imagine how dreary life would be if I didn't make the time to fit it in. You go, kid.

Sounds like your response to this one is pretty close to mine, Andy-- I can't wait to read your review. I listened to the first album again last night and remembered why I like these guys so much, but also confirmed that, for me anyway, the new record sounds like a step forward.

So is this Ezra better than Better Than Ezra?

Yes, a lot Better than Ezra.

Just saw them tonight by accident going to see Elizabeth & the Catapault. Breathlessly awesome. My friend and I were looking at each other thinking "is this real?".