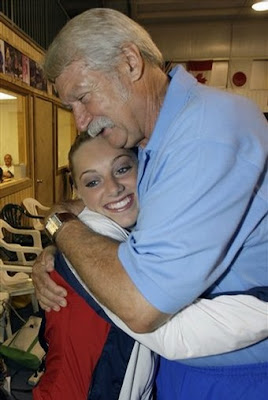 I know, I know. We've had the Michael Phelps onslaught, the dominance of the Chinese in diving, Usain Bolt running faster than the speed of light, etc. But my favorite Olympic Moments(TM) have come from commentator (and former Romanian and U.S. gymnastics coach) Bela Karolyi, who is Oliver Hardy to Bob Costas' Stan Laurel.

Here he is giving a bearhug to an unknown 3' 4" gymnast. Bela likes to hug people. He also likes to yell, wave his arms, and utter indignant epithets such as "Dot was a total reep off."

I love the man. I would watch him for several hours per night if I could. In fact, my guess is that NBC's already gaudy ratings would go up even more if we had more Bela and less, say, softball. I would watch Bela buy fried scorpions from the food vendors. I would watch him dogpaddle in the Water Cube. Bela himself is an Olympic event, and part of the fun is betting on whether he will better his own on-air time to his first tirade of the evening.

Now that gymnastics is over, I miss him. It's a quieter, more professional world. And Bob Costas looks lonely without him.
Posted by Andy Whitman at 10:07 AM

plus what's up with Costas hair? IS that just color or a piece or what?

I like Bela but had a hard time understanding his ROmanian English.

I think Bob Costas looks lonely in general. Maybe Collingsworth can help him out again, lol.

Andy...
You said it perfectly.
Yes and yes.

My guess is that had NBC pulled Leno in from L.A. as a color commentator instead of giving him a vacation pass during the Olympics, we would have seen Bela on the street everywhere, everyday doing who-knows-what to the delight of us all.
gb