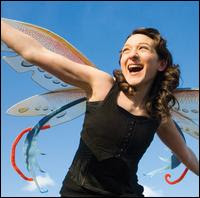 This is Shara Worden, AKA My Brightest Diamond. I like her music. I hate the costume.

Here Shara tries for the butterfly look. Or perhaps she is a moth or a dragonfly. Look at her soar! I blame it all on Sufjan Stevens, Shara's former employer, and his damned Swan outfit. That's probably where she got the idea. Perhaps she thought that a wing is a wing is a wing. But it's a bad idea. Insects, in particular, don't inspire a positive musical reaction. I want to swat them and spray poison on them, not listen to them sing.

The only animal costume that has ever really worked for a musician was that worn by Captain Beefheart, and he was a trout. Bjork wore that dead goose around her neck and her career went into a tail(feather)spin. Paul McCartney dressed up as a walrus for Magical Mystery Tour and then promptly sucked for the next forty years.

These are bad ideas. Wings are bad ideas (again, just ask the fans of Paul McCartney). Shara, we like you just the way you are. You are the monarch of indie pop. You don't need to be a monarch butterfly to prove it.
Posted by Andy Whitman at 11:32 AM