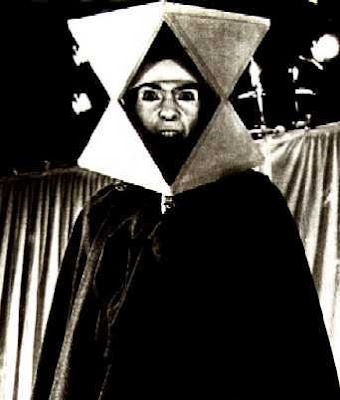 You have no idea how happy this makes me. Dungeons and Dragons in the basement. Peter Gabriel in geometric headgear. It doesn't get much better than that.

We now have a box set for the boxhead years, the final installment in the Genesis catalogue reissues. This is the one I've been waiting for for years. Here are the details.

GENESIS, IN THE BEGINNING

Contains 5 Studio Albums (1970-1975) Expanded with Bonus Audio and Video, Plus an Exclusive Disc of Rarities

LOS ANGELES ‹ Since launching an upgrade of the entire Genesis catalog lastyear, the comprehensive series has followed Genesis' transformation fromprog-rock pioneers to stadium-filling power trio. With the finalinstallment, Rhino ends at the beginning with a set covering the band'searly years with lead singer, Peter Gabriel. GENESIS: 1970-1975 will beavailable November 11 from regular retail outlets and at www.rhino.com fora suggested list price of $139.98.

Produced by Banks, Collins, and Rutherford, GENESIS: 1970-1975 presents five of the band's studio albums as CD/DVD sets featuring new stereo mixesof the original albums on CD, along with a DVD that includes the original album in 5.1 DTS (96/24) and Dolby Digital Surround Sound, plus bonus videos and new interviews with band members filmed exclusively for these reissues. The set contains hours of previously unreleased video as well as photo galleries featuring rare pictures and tour memorabilia.

One of the top-selling recording artists of all time, Genesis has sold more than 150 million albums so far. This 7-CD/6-DVD set collects some of the band's most adventurous and ground-breaking albums, covering Peter Gabriel's tenure with the group.

GENESIS: 1970-1975 spotlights five albums: ­ TRESPASS, NURSERY CRYME, FOXTROT, SELLING ENGLAND BY THE POUND and THE LAMB LIES DOWN ON BROADWAY, plus EXTRAS 1970-1975, a newly assembled compilation only available withthis collection.

Featuring favorites like "The Knife" and "White Mountain," Genesis' second album, TRESPASS (1970), marked the beginning of a five-year journey that saw the band create ever-more daring albums of progressive rock. The album includes guitarist Anthony Phillips and drummer John Mayhew, who were replaced on the following album by Steve Hackett and Phil Collins respectively.

NURSERY CRYME (1971) opens with "The Musical Box," a beautiful 10-minute sprawl that captures the essence of the band's sophisticated musicality tweaked with freewheeling theatrics. Genesis' new lineup starts to define its unique voice on songs like "The Return Of The Giant Hogweed" and "The Fountain Of Salmacis."

The band returned the following year with FOXTROT (1972), a breakthrough album hailed by critics and embraced by fans, especially in England where it reached #12. Two tracks in particular, ­ "Watcher Of The Skies" and"Supper's Ready," ­ became live staples for years to come. Nearly filling the album's second half, "Supper's Ready" stands as an avant-garde showcase for each member's individual talents. DVD extras include: over 30 minutes of live video from 1972 of the band performing on Belgian television's Rock of the 70s and on stage at the Piper Club in Italy.

Genesis' popularity continued to grow with its fifth studio album, SELLING ENGLAND BY THE POUND (1973). These eight songs find the band's inventive storytelling and imaginative arrangements coming into sharper focus with "I Know What I Like (In Your Wardrobe)" ­ Genesis' first hit single in the U.K. The album also introduced audiences to "The Cinema Show" and "Firth Of Fifth," songs that would become popular concert staples. DVD extras include: video from 1973 recorded during a performance on Italian television and on stage in Bataclan, France, over one and a half hours of live performance.

The band wasn't at a loss for inspiration for THE LAMB LIES DOWN ON BROADWAY (1974), a double album about a Puerto Rican hood searching for his brother. It was to be Gabriel's final release with Genesis. The band toured for the album, performing the entire 90-minute album along with an ambitious stage show complete with costume changes, theatrical lighting and pyrotechnics. The title track, "Carpet Crawlers" and "In The Cage" remain popular parts of the band's live show. The album will be presented with the Surround Sound mix. Additional bonus features will be included on a DVD, including a performance on the French television show Melody.

GENESIS concludes with EXTRAS 1970-1975, a disc of rarities offered exclusively as part of this boxed set. The compilation contains 10 tracks,including the 7" single "Happy The Man," a demo of "Going Out To Get You," and the b-side "Twilight Alehouse." A trio of songs ­ "Shepherd," "Pacidy" and "Let Us Now Make Love" ­ are taken from the BBC program Nightride. The disc also includes a VH1 Boxed Set Special on Genesis 1967-1975 and a performance from the Midnight Special.

The final four songs on EXTRA TRACKS 1970-1975 ­ "Provocation,""Frustration," "Manipulation," and "Resignation" ­ are the legendary"Genesis Plays Jackson" tapes. The band recorded these songs in 1970 for a documentary about painter Mick Jackson. The documentary never happened and the songs were lost until now. Fans will notice how sections of this music evolved into other songs. "Frustration" is an early version of "Anyway" from The Lamb Lies Down On Broadway, while "Manipulation" features themes heard later in "The Musical Box" from Nursery Cryme.
Posted by Andy Whitman at 1:26 PM