Baby's Not in Black, and I'm Feelin' Blue 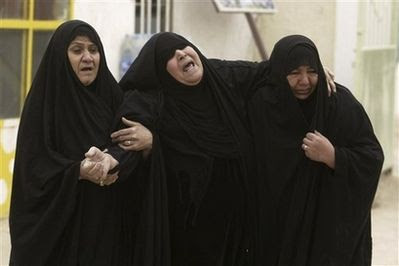 Today my wife wore a skirt the color of cantaloupe. She headed out the door on her way to work, looking like the sensible professional woman she is, and looking like a paragon of fashion, because she is that, too. Nobody would know that her mom died two weeks ago, and that she's mourning her, that she finds herself crying in strange and awkward places. It happens while driving a car, while taking a shower, while preparing a meal.

At one time everybody would have known she was mourning because she would have been forced to walk around for an extended period of time in a black dress. For six months, a year, she would have shuffled around solemnly, and that black dress would have been as good as a flashing neon light: Sorrow Here. Tread Carefully. But women don't wear mourning clothes any more, at least in our culture. They take their three bereavement days from the workplace, which is magically supposed to take care of the great, yawning void in human hearts, and then they get back to the daily grind. Some of them wear skirts the color of cantaloupes. Nobody knows.

Yesterday we went to church. "Hey, haven't seen you in a while" various people said to us. Right. That's because we've been living in hospitals and funeral homes. "What's up?," they asked. "Well," I replied, "Kate's mom died, and my dad is dying." "Oh," they said, "that sucks. My life sucks too. Can I tell you about it?" And they did.

I'm not exactly sure what I expect, but I think I expect something other than this. Kate's mom's death and funeral came and went, and we got lots of flowers and cards and sympathetic phone calls. From work. From non-Christian friends. From Christian friends outside our church. And our local church? A couple people called and sent nice e-mail messages. That's something, I suppose, and I'm grateful for it. But it wasn't nearly enough. In the old game of Church vs. Everybody Else, Everybody Else won in a landslide. It might have been different if we had had a baby. We probably would have been showered with meals and feted and given cloth diapers. But we're at the other end of life, and people are dying, not being born, and nobody knows what to say, so they say nothing at all. We were virtually invisible in the local manifestation of the body of Christ.

This produces profound disappointment. I wish it didn't. I wish I could shrug it off. Nobody's intentionally ignoring us. They just have their lives, almost exclusively with people their own age, and they make the social rounds and discuss how to be better stewards of the environment and how to serve people halfway across the globe. They are good people to whom we are invisible.

Our old Presbyterian Church had the Funeral Ministry down to a science. Some old geezer would croak, and the women would kick it into gear, ordering flowers, coordinating meals for the grieving family, cooking up a whopper of a potluck for the post-funeral bash, complete with jello salad and green bean casserole. Those old women didn't know what to say either. So they cooked. It was something. It was a lot. They were simply there, and their presence was meaningful as they ladled more green bean casserole on your plate.

We don't have a Funeral Ministry at our church. It's not a very trendy kind of ministry, and probably nobody would have interest in heading it up. All I know is that a funeral came and went, and nobody was there. Either nobody knew, or nobody cared. Neither prospect is good news. In the meantime, my wife heads off to work in her cantaloupe-colored skirt, acting for all the world as if all is normal. But all is not normal. She walks around with a hole in her heart. Nobody sees it. Nobody knows.
Posted by Andy Whitman at 7:49 AM

Your post reminded me of this poem by Julia Kasdorf. I read it as a grace-filled admonition:

What I Learned From My Mother

I learned from my mother how to love
the living, to have plenty of vases on hand
in case you have to rush to the hospital
with peonies cut from the lawn, black ants
still stuck to the buds. I learned to save jars
large enough to hold fruit salad for a whole
grieving household, to cube home-canned pears
and peaches, to slice through maroon grape skins
and flick out the sexual seeds with a knife point.
I learned to attend viewing even if I didn't know
the deceased, to press the moist hands
of the living, to look in their eyes and offer
sympathy, as though I understood loss even then.
I learned that whatever we say means nothing,
what anyone will remember is that we came.
I learned to believe I had the power to ease
awful pains materially like an angel.
Like a doctor, I learned to create
from another's suffering my own usefulness, and once
you know how to do this, you can never refuse.
To every house you enter, you must offer
healing: a chocolate cake you baked yourself,
the blessing of your voice, your chaste touch.

i'm sorry we screwed up so badly, andy.

I am too sad about this to think.

This afternoon I will sit and I will pray for both of you.. and begrudgingly, for what we in this family of faith, sometimes become.

Hi, Gary. It's nice to hear from you. Let me clarify a couple things.

Do I think that sometimes Christians are selfish and don't necessarily think about the needs of others? I sure do. Does that hurt? Yes. Do I do the same? Yes. In other words, I'm aware of my own culpability here.

Second, this is more about institutions and policies than it is about individuals. I don't believe there's a single individual in my church who would intentionally be negligent or malicious in caring for hurting people. I just think that sometimes things fall through the cracks. And when close relatives die, we need to make sure that that doesn't fall through the cracks. It's a big deal. I think that my local church needs to do better in this area. And I have no doubt that they desire to do so, and that they will.

I'm sorry. Sadness is what it is and mostly, it's just sad... and I think that's OK.

Perhaps this will help a little.

My chair is my home.
The ceiling fan counts
timeless seconds
on a broken calendar.
Sleep is limbo.
The price of gas doesn't matter.
Silence consoles
and doing nothing, is work.

Food
is a still life image.
Sickness would be respite.
Television is boring;
music, uninteresting.
Friends... are friends
and God
is my Hammock.

I am very sad.

Aloneness is reinvented.
Aches and pains
are fitting condiments.
The daily news,
isn't.
Art, is but decoration.
When driving,
I do not want to stop.
Routine becomes ritual
and my dog
silently
studies me
and is
as sad
as I am.

Conversations,
stop at my ear.
Lying on the floor is acceptable.
Photographs
anoint my wound.
The pit in my stomach
is a bursting heart
and that's OK
because
I
am very,
very
sad.

Our church came through a little better for Jan and for me. I suspect our Presbyterian Church has more people who've been in our shoes than does yours. When we were all younger, we looked around for something to care about, such as the environment, or human rights, or poverty, or war. Now that we are older, there are a multitude of more personal things to care about, and these same personal things are happening to those around us, and we can sympathize and empathize. I understand your loss, because I too have experienced a similar loss, and I remember how you feel.

Andy, Gary Brown forwarded your blog to me. I was at the art conference for a few hours an I remember you. I am in grief over how you and your wife have been so missed by your body of believers. I am truly sad and I acknowledge the grief and pain of your wife and of yourself. Please know that this is not who God is - just Christians doing a crappy job. Julia Begert

Thanks for the poem, Joanna. It's beautiful, and it's true.

I think that a lot of the problem is the feeling that we should be able to FIX something and not knowing how to do that. But it's the awkward sitting uselessly in a room behavior to which we are called.

In the separation of sheep and goats, the standard is not that we healed the sick or set the prisoners free -- that is God's purview. We are judged (in part) on whether we went and sat with the sick in the midst of their sickness and visited those in prison while they were yet convicts.

Sadly, the "usefulness" of this ministry is often missed until WE are sick or imprisoned our own selves.

Our love and prayers to you and your beloved.

i am so sorry for your loss. it appears that i was more than able to at the very least comment on your music posts, but unable or forgetting to say anything about what you are going through. i'm not sure why this happened, especially since i know firsthand what it feels like to lose you mother.

i'm really sorry for what has happened. i also apologize on behalf of the church, as well as myself for not doing or saying anything. i can't imagine how it feels that no one at your church cares. please forgive us for thoroughly blowing it.

andy, i'm really sorry this happened. you are right. our church is young. we are good at beginnings. i'm sorry this has failed you both.
we (teddy and i) wish we would've known how to help you. when teddy's dad died, there wasn't much people could do for us other than tell us they love us. if that did not happen for you both, please forgive us.
teddy and i are here for anything we are able to do.
please express any needs you have.
jamie

Your post made my heart break - how many times I feel like someone's sorrow is none of my business, and so I do nothing. I'm convicted, for myself, and for my church.

I know this happened a little while ago - I hope you both are doing a little better.