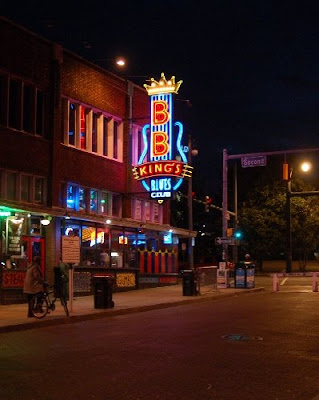 Paste just ran a story about a guy who planned his vacation around visiting the country's best record stores. He visited record stores in Nashville, Memphis, New Orleans, and Atlanta. Okay, that doesn't really qualify as "the country," but it still sounds like a cool vacation to me. I hear there may be some other interesting sites in some of these cities as well.

Throw in some blues stops as we head through the Mississippi Delta, skip Atlanta (nothing against Atlanta, but I've already been there too many times), and you've got the dream vacation that I've actually pondered for many years now. The trick is convincing at least one other person that this is a dream vacation. At this point, nobody's buying. For some reason, spending six to eight hours per day in a record store doesn't appeal to anyone else in my family. Want to come?

I do have my qualms, by the way. By this point the whole cradle of American music has become so polished and commodified and tourist-accessible that it's probably like visiting the Venetian Hotel in Las Vegas instead of Venice itself. You think they're playing slide guitar with a broken beer bottle at B.B. King's Blues Club on Beale St. in Memphis? Still, I'd be willing to take a gamble on locating that unknown roadhouse outside of West Helena, Arkansas. Who wants to follow the blues highway?
Posted by Andy Whitman at 8:55 AM

It's not the equivalent of 8 hours a day in a record store, but my wife actually agreed to stopping in Cleveland so I could see Radiohead and then the Rock & Roll Hall of Fame the next day.

For our 15th anniversary, we considered a nice getaway to an island somewhere, but with 3 young kids staying with relatives, I didn't feel comfortable going too far away. So the destination was Chicago with a stop in Cleveland. My wife is very tolerant.

As I recall, I suggested a blues highway trip a while back, and you and Jan were all for it (don't remember Kate's response, but I assume she would be in favor as well). Now, all we have to do is figure out when either one of us can fit it into our busy schedules.

Last time I was on Beale Street in Memphis, there were still some unknown folks playing and singing real blues. Of course, that was a few years ago.

Nashville is definitely worth the stop. Grimeys, which was mentioned in the Paste article, is incredible for its used collection and the vibe of the place. Freya and I were just walking downtown last night and we past Ernest Tubbs, but we didn't have a chance to stop in.