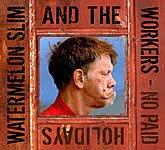 Watermelon Slim and the Workers – No Paid Holidays

Bill Homans’ (AKA Watermelon Slim’s) first record was a 1973 protest album. Recently back from a grunts-eye view of Vietnam, he used a tin can shard as a pick and his Zippo lighter as a slide, and laid down a series of bitter, acerbic ruminations on the horror and the folly of that memorable war. In the meantime he’s passed his days as a truck driver, forklift operator, sawmiller, firewood salesman, collection agent, funeral parlor director, small-time criminal, watermelon farmer, college graduate times three, and member of Mensa. And, oh yeah, one hell of a slide guitar player and blues singer.

Never mind that Bill went thirty years between albums. The last five years have seen five new albums, and No Paid Holidays continues the winning streak. There are original field hollers here, original laments that sound like they come directly from the Delta, original electric Chicago blues, and an oddly endearing blues cover of Laura Nyro’s “And When I Die.” On “Archetypal Blues No. 2” Bill conjures the spirits of Robert Johnson, Muddy Waters, and Howlin’ Wolf. “Most of my heroes are dead,” he mumbles, and then burns through a solo that would raise the dead. The guy is good. Real good. 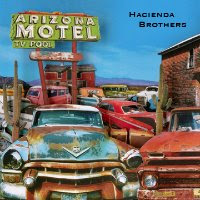 Most of my heroes are dead, too. One of them is named Chris Gaffney, who succumbed to liver cancer in April of this year. In addition to his stellar work with Dave Alvin’s band The Guilty Men, Chris was the co-leader of Hacienda Brothers, his partnership with former Paladins guitarist and songwriter Dave Gonzalez. Unable to decide on whether they were a soul band or a country and western band, the Hacienda’s simply split the difference, and Chris’s smoky, souful baritone could plead like Otis Redding or swoop down to nail the bass notes on a honky tonk weeper just like George Jones. He was a great singer, and nowhere is the breadth of his talent displayed more dramatically than on Arizona Motel, the Hacienda’s swan song:

A lot of days are gone
But I’m still holdin’ on to what they used to be
Back when it was yesterday the future seemed so far away
And there was always time, but now it’s slipped away

That’s from the album’s opening track, a classic honky tonk weeper. A month after wrapping up the recording Chris was diagnosed with cancer. Two months later he was dead. There are thirteen more that are just as moving, just as soulful, just as rocking. It’s hard country, hard soul, and a hard life. It’s a beautiful thing, not to be missed. 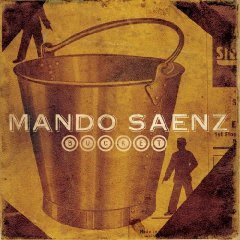 Mando Saenz’s 2004 debut album Watertown was a pretty if somewhat slight excursion down the well-traveled trail of the plaintive folky with a twang. His sophomore effort is considerably more muscular, and features gritty contributions from guitarists Richard Bennett and Will Kimbrough and superb backing vocals from Kim Richey. The strengths of the debut album – Mando’s keening tenor, eye for detail, and undeniable melodic gift – are still intact. But this time he’s even better thanks to the all-star accompaniment. If Crowded House frontman Neil Finn hailed from Texas instead of New Zealand, this is what he would sound like.