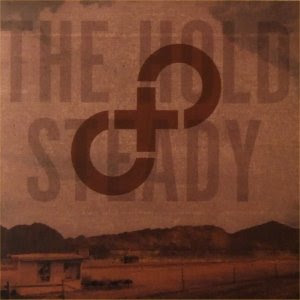 I talked to a young music critic in Los Angeles last week. He's a Christian, and he loves The Hold Steady, and he's trying to put the two together. "How can I tell people to go out and buy an album that tells us that we're our only saviors?" he asked me.

Good question. "You tell them that Craig Finn is wrong on some big issues," I told him, "and that he's the best songwriter on the planet."

And he is. And he continues to be on Stay Positive, The Hold Steady's latest album, out Tuesday. Those of you who have followed this saga know that Craig Finn, who looks like a near-sighted accountant or Charles Nelson Reilly, take your pick, wants to be young Bruce Springsteen really, really badly. You probably also know that his band features a a fantastically mustachioed keyboard player who wants to be Professor Roy Bittan, Bruce's keyboard foil, and a guitarist with a beergut who wants to be in The Who or AC/DC. These Pabst-fueled yobs play melodramatic, outsized rock 'n roll songs meant for the back row of the arena. And they also play songs that bear close scrutiny as superb writing. It's all done by regular guys, just like you and me, and that pretty much defines my heavenly house band, which will feature at least one seraph with a beergut.

There are a few new musical twists with this round -- baroque harpsichord on "One for the Cutters," some Stax/Volt horns on (naturally) "Sequestered in Memphis," a spooky theremin drone on "Both Crosses." But mostly this is more of the same, which means that it's full of classic-rock-leaning literary songs about people who are too old to be kids, who drink and drug too much, and who wonder about that brick wall straight ahead. They party on the weekends. Hell, they party just about any night. But there are casualties this time, some kids who didn't come out on the other side of Too Much Fun, and a growing awarenesss that although growing older doesn't have much to do with growing up, it's still a bitch. "We gotta stay positive," Finn sings on the title track, and there's more than a hint of desperation in the pep talk.

Finn is about nothing if not assembling his own internal mythology and rock 'n roll hierarchy, and so we have references and in-jokes to previous Hold Steady songs, and oblique lyrical nods to Led Zeppelin and The Clash. "Raise a toast to Saint Joe Strummer," he chants over the blistering punk assault of opening track "Constructive Summer," the best song I've heard this year. If he's proposing a new form of canonization, who am I to question him? I've experienced a few holy moments with The Clash frontman as well. But Finn is at his best when he's poking at the malaise, probing the disconnect between the neverending party and the hollow comedown of the wee small hours of the morning. Like Hazel Motes in Flannery O'Connor's darkly comic novel Wise Blood, he's obsessed with asserting his own autonomy, and he can't stop talking about God:

She says sometimes she sees these things
Right before they're happening
Hail Mary full of grace
Some nights she swears she feels her face
She's known a couple boys who died
And two of them were crucified
And the last one had enlightened eyes
But the first guy he was Jesus Christ
Hey Judas - I know you made a grave mistake
Hey Peter - You've been pretty sweet since Easter break
Now it's four a.m. and she's wide awake
She's shivering and smiling

That's from "Both Crosses," a harrowing little ditty about a holy wreck of a human being, and it's what Craig Finn does best. She might be Holly, the hooker from previous Hold Steady albums who shows up at Easter Mass with her hair done up in broken glass. It's hard to tell; this time she's not named. But that's what Craig Finn does. He writes about messy people, wrecked and precious.

Here's the deal: five years in, The Hold Steady apparently still adhere to the crazy notion that rock 'n roll can change your life for the better. They hold out the music as a form of salvation. It's not. From that standpoint, it's just another idol. But it's a good thing, even a precious thing when it's written this well, played as if life was in the balance. That's the great irony. The Hold Steady don't hold steady. They hold nothing back. They revel in the messiness and the power chords and the arena-thumping bombast, and they do it as well as they've ever done on Stay Positive.
Posted by Andy Whitman at 8:51 AM

What a great review. I haven't been as enthusiastic as you about their previous albums, but now I'm going to have to buy this one anyhow.

On behalf of Rough Trade / Beggars Digital, Vagrant and The Hold Steady, many thanks for plugging "Stay Positive" (street date 14th July UK / EU and 15th July US / Can) ... .. thanks, also, on behalf of the label and the band for not posting any pirate links to new (studio) material and, if your readers want good quality, non-pirated, preview tracks, “Sequestered in Memphis” is available for fans and bloggers to link to / host / post etc on the band’s MySpace ... .. check-out http://www.myspace.com/theholdsteady and http://www.theholdsteady.com for details on “Stay Positive” and the band’s 2008 tour ... .. a selection of other tracks is also available on the band’s MySpace, although these are for promotional (and fan link) purposes only and the artist and labels have kindly asked fans and bloggers not to host these tracks directly or to link to any pirate sources – or, of course, host / link to pirate copies the full new album - for which many thanks in advance.

Thanks again for your plug.

Great post. I've been looking forward to this album coming out, and have been patiently waiting for July 15 - didn't download it from iTunes like a lot of people. I did hear the new songs from a WXPN broadcast as well as at The Hold Steady's show in Baltimore a few weeks ago. I liked the references to Christ - can't quote them at the moment but certainly made me look forward to listening to the album closely. And the "toast to St. Joe Strummer."

I know you've written about their live show before, but it definitely is true - best live band out there right now. Craig Finn is very fun to watch. He enjoys being on stage. Non in a "watch me" sense, more like "I'm thrilled to be having fun at this show with everyone else." He dances to his own songs. He sings a line into the microphone and then sings 3 more lines to the crowd away from the mic. And he doesn't take any of it for granted.

If music critics ruled the world (I try, but I usually have to settle for conquering the virtual universe in Age of Empires), then by royal decree everyone would have to listen to "Stay Positive" and Craig Finn's bespectacled countenance would be on the ten dollar bill.

Man, I love the Hold Steady. I have, however, had the same concern as your friend in L.A. I appreciate your insight.

The Web Sheriff is everywhere, protecting the musical downtrodden wherever he flashes his badge. I noticed that he mosied into town on the Paste website as well, and left the exact same comment on Hold Steady producer John Angello's comments on the behind-the-scenes making of "Stay Positive."

did you see the videos that THS recorded for AOL's spinner sessions? they do a version of "stay positive" with a slightly different arrangement, and a killer version of "constructive summer" that ends with craig almost in tears, staring at the ceiling. very bizarre, very beautiful.