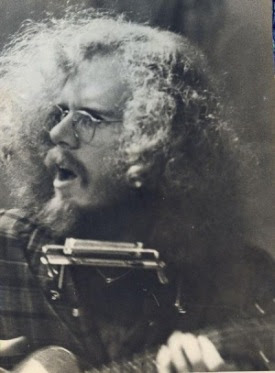 What are the odds that a former member of a band called Gandalf and the Motorpickle, and whose first solo album is called Ask the Unicorn, would release an album that approaches musical masterpiece status? I know, I wouldn’t make that bet either. But it’s happened. And you can chalk it up to the pervasive hippie influence of Vashti Bunyan. Ever since Vashti's "discovery," thirty years after the fact, small indie labels have been scouring the vaults to uncover the first generation of freak folk artists. Enter Ed Askew, who fits the bill perfectly.

Yale graduate, painter, poet, art teacher, and yes, founding member of the fortunately long-defunct Gandalf and the Motorpickle, Ed recorded his debut album Ask the Unicorn in 1969. In spite of the twee title, the album was anything but a hippie-dippy lovefest, and offered surprisingly unsentimental and unsettlingly poetic ruminations on love and the loss of love. This was confessional singer/songwriter fare before the genre really took off with Joni Mitchell and Jackson Browne. His followup, Little Eyes, was recorded in 1970, but languished in musical limbo when his label went under. And there it sat.

Delivery took a while. When it emerged, blinking into the sunlight, 37 years after conception, the new baby already had a beard and a middle-aged beergut. And a tiple. But more about that in a minute. Sporting a damaged, off-key voice that emerges midway between Bob Dylan’s anguished howl and Tiny Tim’s fey falsetto, Askew sings visionary songs full of mystical imagery. He’s William Blake with a better sense of melody. Playing up the esoteric hermit role, he plucks the tiple, a ten-stringed South American instrument that looks like an overgrown ukelele and sounds like an autoharp with unbelievable sustain. The drone-like quality of this music is its most haunting quality, and that, combined with the mystical lyrics, creates an overpowering sense of awe and mystery. This is music by which to explore the cosmos, redeemed from total heaviosity by Askew’s skewed eccentricity. The earnestly poetic anti-war anthem “Song for Pilots” careens into a woozy “nah-nah-nah” coda that sounds like the “Hey Jude” choir after a hard day’s night of partying. “Little Infinite Love Song,” a melancholy, minor-key gem, skirts around but never alights on the reason for the sadness, and is all the more moving because of its dislocated angst. “Waiting in the Station” frames its abstract lyrics around a basic 12-bar blues structure. These songs are out there, strange and exotic, but never so far removed from the familiar world that they fail to connect in their impressionistic beauty.

And this a lovely album. There is a yearning, elegiac quality to this music that comes through loud and clear; a lonely hippie looking for and not always finding something solid and worthwhile to stake a life on. That theme sounds as relevant in 2008 as it did in 1970. It took far too long, but I’m grateful that the baby saw the light of day.

nice article.
please check out
http://edaskew.bandcamp.com/
this is a new site where you can hear full tracks of some of my songs any time for free.
you can also buy something if you wish.