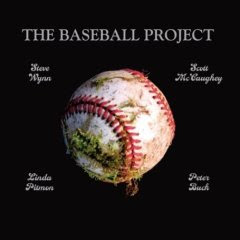 I love baseball. I love all sports, and have been known to watch synchronized swimming and the Westminster Dog Show when there's nothing else on the tube, but I particularly love baseball. Every April I am imbued with renewed optimism as I contemplate the prospects of a world championship banner in Cleveland, Ohio. By July these hopes are dashed, cruelly, because the Indians suck. But I keep coming back, year after year, because baseball is the most human of all sports. It's slow. You can watch the grass grow between pitches. And you can watch that never-ending duel between pitcher and batter unfold cinematically, watch the mannerisms of the players, discern a little bit about who these people are as they go through their gyrations.

That's the spirit captured on The Baseball Project's Volume 1: Frozen Ropes and Dying Quails. That's baseball terminology for the non-initiated, but don't sweat it. The band is Steve Wynn (Dream Syndicate), Scott McCaughey (The Minus 5), Peter Buck (R.E.M.) and Linda Pitman. The guitars buzz loudly, the drummer (Pitman) slams the kit, and Wynn and McCaughey unfold thirteen tales (both tall and short) of real-life major league baseball players. Some of them are legendary (Ted Williams, Willie Mays). Some of them you've probably never heard of (Big Ed Delahanty). All of them are characters, in the best and most three-dimensional sense of that term, and the magic of this album is that these two songwriters manage to find the flesh-and-blood human beings behind the statistics and the Hall of Fame careers.

Ted Williams, as iconic a baseball player as has ever lived, is here shown to be both a blowhard and an insecure little boy, just as he was in real life. "Don't you know who I am? I'm Ted Fucking Williams," Wynn sings, and that, better than any other catchphrase, captures the essence of the man. Curt Flood, a good ballplayer and a principled human being, is justly celebrated as someone who quietly changed the game. Best of all is "The Death of Big Ed Delahanty." Who is Big Ed Delahanty? I didn't know, so I looked him up. He played for several major league teams during a fifteen-year career late in the nineteenth century and early in the twentieth century. He got kicked off a train traveling near Niagara Falls for drunken boorishness and obnoxiousness, wandered over near the falls, and fell into the abyss. Now that's a baseball story, and Wynn and McCaughey tell it beautifully.

There's sturdy rock 'n roll and Pete Buck's chiming guitars to back it all up, and if the hooks aren't quite as memorable as I would like them to be, these are still solidly conceived and solidly executed songs. So call it a double into the gap, and a far better performance than the sorry Cleveland Indians have been able to muster in 2008.
Posted by Andy Whitman at 8:15 AM

Did Dale Murphy get a song?

Just wanted to say thanks for your blog and for this review in particular. After reading your review, I immediately ordered a copy of the cd for my baseball-loving partner!

I've also been loving the Sun Kil Moon cd you reviewed some months ago. Turns out one of his songs on that cd, which you mentioned in your review, is the little town where I grew up.

Andy, I don't know much about baseball, but I do know a little something about being odd, and I think you do too. I've gone and tagged you with a blog meme. I do apologize if this is just plain irritating to you.

Do you have Rhino's Baseball's Greatest Hits and Baseball's Greatest Hits - Let's Play II? Filled with classic songs and commentary about the grand old game, including my personal favorite, Steve Goodman's "A Dying Cubs' Fan's Last Request." With these two albums, the Ken Burns PBS baseball soundtrack, and a few other tunes thrown in for good measure MyPod has a lengthy baseball playlist. Sounds like there's a new album to add . . .
And yet another connection we have - the Indians. Had a great time at the Jake (oops, I mean "The Prog") yesterday watching the Tribe sweep the Rays.