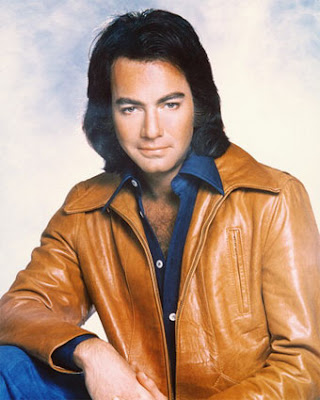 Look at this man. Look at that sculpted mane. Look at that button casually left unbuttoned, and look at that chest hair. Don't you just want to throw a banana cream pie in his face, or zap him with a cattle prod?

Perhaps my reaction is exaggerated. But you have to understand the extreme trauma this man has caused in my life. I was young. Whatever money I made came from mowing lawns, and it wasn't much. Buying an album was a big deal. And so I savored the days before Christmas, knowing that I had wisely provided my parents with a shopping list of desired music. Surely some of it -- Fairport Convention, maybe, or Pink Floyd -- would show up under the tree.

Instead I got Neil O. (as in "Oh, shit!") Diamond. My parents loved Neil Diamond. In their minds he was the classiest entertainer on the planet, a smoldering mass of songwriting, singing sensuality. He was what Frank Sinatra had been in his younger years. He could make the women, including my mother, swoon. He was so good that he ought to be in Vegas.

And so instead of Meddle I got something called Moods. I was already in a bad one even before I listened to the music. And then it got worse.

People paid for this crap? I was writing better lyrics than that in second grade. But I knew the problem. I didn't have chest hair.

And so it is with grudging admiration that I admit that his last two albums are actually pretty good. Not great, mind you. Neil still has a tendency to employ the vapid cliche and to slather on the bombast like whipped cream from the can. But those tendencies are reined in considerably. Both 12 Songs and his latest, Home Before Dark, have the decided advantage of employing Rick Rubin as producer, and Rubin, just as he was with Johnny Cash's American Recordings, is a master of the "less is more" school of production, and that's precisely what Neil Diamond has needed all along. The arrangements are spare, stark, and simple. Where Diamond previously gravitated to bloated string sections and sweeping arrangements, he's now content with acoustic guitar, bass, and understated keyboards. Half of Tom Petty's Heartbreakers provide the rootsy accompaniment, and Diamond himself contributes several introspective gems to offset the usual overheated love songs. Maybe it's age and maturity; maybe it's just the realization that making the women swoon doesn't work as well at 67 as it worked at 32. In any case, Neil Diamond has delivered arguably the best music of his career in the past few years, and easily his best work since his late '60s Bang singles.
Posted by Andy Whitman at 9:25 AM

The lyrical rejiggering is priceless, Andy.

You posted a while back about the lack of comments being discouraging sometimes. I just wanted to take a chance to tell you that I check every single day for updates. You're one of my favorite writers, and I know that every post is going to be excellent. Keep it up, I don't know what I'd do without your stuff.

When's your next Paste feature?

beautimus.
i had the "let's culture this boy through muzic" moment as well. but I got Pat Boone.

Pat Fargin Boone. This was 1979. Zeppelin was out of the box, let alone hip-shaking Elvis.

You know what might be a fun post (not fun in the traditional meaning of that word, but still...)? If you were going deaf and only had time to listen to an hour worth of music before the tunes were gone, what would you fill that hour with? (We're assuming you can still listen to the voice of your sig others through the miracle of them shouting into your skull, so you can't opt for that over music...).

you're a lucky man, IMO.

I got a steady stream of Kenny G under my tree.

And yeah, when's your next Paste feature?

Heck, my mom thought I'd go nuts for Mack Davis, so that wound up under the tree, when all I wanted was a David Bowie record. Diamond would have been a step UP!

THe laugh was appreciated!

i've always wondered what diamond was doing sitting in the with band for the last waltz.