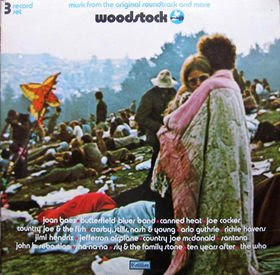 Before most of the hippies kick the bucket, we will have to suffer through the ignominy of the 50th anniversary of Woodstock. That will no doubt be a mindblower, man, when it occurs in 2019, and will find the former idealists, now Republicans, in their dotage, but still flying the freak flag and hearkening back to the glorious days of yore.

In the meantime, the 40th anniversary is coming up in just a couple months, and there are plenty of ways planned to nudge you farther along the free love --> capitalist consumer continuum. To help set the mood, Rhino is re-releasing the original soundtrack to the Michael Wadleigh documentary film that made every pre-adolescent kid, including me, long to be a rock star and to try the brown acid, which, although not specifically too good (according to the warning from the stage), was still apparently good enough to make nubile young women dance naked and wave their hands in the air. It was an image that worked for me.

So let's get it out of the way: yes, Woodstock was a landmark cultural event. Two years after the Summer of Love, and long after Haight-Ashbury had descended into anarchy, the film crews captured the commodification of hippiedom, the precise moment when the counterculture became the mainstream culture. After Woodstock, and for at least the next decade, every high school and college in America was dominated by the street(s) that spawned a movement. We thought it was the corner of Haight and Ashbury. Instead, it was just Madison Avenue, and there were tie-dyes and peace-sign earrings to be had at every department store in the land.

The music? You know what? It wasn't very good. Listening to the two hours of music here, forty years removed from its original context, it's apparent how badly most of these legendary bands performed. It was, without a doubt, intimidating to perform in front of 400,000 people. It was, I'm sure, tough to compete with almost half a million people zonked out of their minds, and thunderstorms, and power outages. But, aside from Santana and Sly and the Family Stone, who turned in incendiary sets that still sound great, most of these performances are disappointing. Crosby, Stills, Nash, and Young couldn't harmonize worth a damn, and when CSN&Y can't harmonize, there isn't much else to recommend. The Who, who were arguably the best rock 'n roll band in the world at the time, turned in a completely lackluster and ragged version of Tommy (or at least the little bit we get to see in the movie and hear in the soundtrack). John Sebastian, formerly of The Loving Spoonful, sounds like a stoned dipshit. Jimi Hendrix, whose version of "The Star Spangled Banner" closed the festival, surely captured the sounds of bombs bursting in air, but thirteen minutes of bombs bursting in air now sounds like, pardon the pun, overkill. Joan Baez sounds like her lower lip is quivering with indignation, and Country Joe and the Fish still have to be the luckiest band in the world, an otherwise undistinguished and completely forgettable bunch who just happened to be in the right place at the right time. The numerous stage announcements still retain their historical charm, and I still think it's impressive that Wavy Gravy and company found a way to whip up breakfast in bed for 400,000. But, in general, this soundtrack has not aged well at all.

If you haven't seen it, watch the documentary, if for no other reason than to see the naive but admirable idealism. Don't take the brown acid. And don't take any of it particularly seriously. Utopias, this side of heaven, are not a good bet. Altamont, where the counterculture fell apart, took place only four months after Woodstock.
Posted by Andy Whitman at 4:59 PM