The Last Hurrah of the Music Industry? 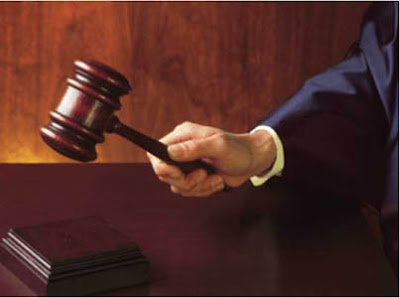 A federal jury Thursday found a 32-year-old Minnesota woman guilty of illegally downloading music from the Internet and fined her $80,000 each -- a total of $1.9 million -- for 24 songs.


Illegal downloads of musical files will cost a Minnesota woman $1.9 million, a jury has decided.

Jammie Thomas-Rasset's case was the first such copyright infringement case to go to trial in the United States, her attorney said.
Attorney Joe Sibley said that his client was shocked at the fine, noting that the price tag on the songs she downloaded was 99 cents.

She plans to appeal, he said.

Cara Duckworth, a spokeswoman for the Recording Industry Association of America, said the RIAA was "pleased that the jury agreed with the evidence and found the defendant liable."

"We appreciate the jury's service and that they take this as seriously as we do," she said.

Thomas-Rasset downloaded work by artists such as No Doubt, Linkin Park, Gloria Estefan and Sheryl Crow.

This was the second trial for Thomas-Rasset. The judge ordered a retrial in 2007 after there was an error in the wording of jury instructions. The fines jumped considerably from the first trial, which granted just $220,000 to the recording companies. Thomas-Rasset is married with four children and works for an Indian tribe in Minnesota.

Buy a 50-inch high-definition TV for your kid. Plug it in, and hand him the remote control. Then say, "If you turn this on and watch the picture, you're going to be fined millions of dollars. You make $7.25 per hour at Taco Bell? Too bad."

That's the fine predicament that the dearly beloved Recording Industry Association of America finds itself in these days. Everybody knows it's wrong to download music for which you haven't paid. The poor, suffering artists deserve to eat, same as your taco-stuffing kid, and, by God, the fat cats at the big labels deserve their 90% of the cut, too, I suppose. But try explaining to your taco-stuffing kid[1], who also happens to have iTunes, and a flash drive, and friends in the dorm who have iTunes, and who has somehow inexplicably ended up with 20,000 songs on the ol' laptop, that it's a bad idea to download music for free. What was that rationale, again?

"Just don't do it," you tell them. "Put down that remote control. Pay no attention to that big shiny screen, or that Power button."

Given the current exigencies -- the presence of the big screen, the remote control in hand, the power most definitely being ON -- it's getting increasingly difficult to convince anyone that they shouldn't press that magic button. I know a lot of musicians. And I sympathize with their predicament, really I do. I honestly believe that they deserve to make a living doing what they do best. But perhaps, dear RIAA, it's time to rethink what "making a living" might look like. And perhaps you might earn just a smidgen more sympathy if you didn't sue some poor social worker for $1.9 million for downloading 24 songs. That's $950,000 per album. Must be nice songs.

Changes in technology have always driven the market. New ways of doing business are created. Old ways of doing business fall by the wayside. Anybody bought a set of Encylopedia Britannicas or an 8-track tape player lately? The smart musicians and the smart music labels have already figured this out. They're promoting the music online, offering complimentary tracks for download, marketing new music in unconventional and creative ways. And, astoundingly enough, in spite of the dire warnings that the sky is falling, there are still many musicians who are able to earn a more-than-comfortable living. But as long as the RIAA is calling the shots, there will still be those proponents of the equivalent of hard-bound encyclopedias and 8-track tapes, ready to sue the shit out of any poor schlep who dares to push the magic button and listen to the pretty sounds.

I love music. And I love musicians. But I can't help hoping that this is the last hurrah of a dying music industry. Some things deserve to die. The RIAA is one of them.

[1] Disclaimer: "Kid" in this case is purely hypothetical. Yes, I have kids. They don't work at Taco Bell.
Posted by Andy Whitman at 7:55 AM

suing the poor woman for $1.9m is an unfair assessment of the record industry.

i can't believe i just stood up for the man...what's next? voting republican? yikes.

I doubt the RIAA gets a dime. With a verdict that large, she'll file for bankruptcy and all the RIAA will get is even more BAD PR.

No doubt they'll get some bad PR. And deservedly so.

This is an absolutely unenforceable law, and if there was a real attempt to enforce it, 95% of America's college students would be in jail. Somehow I'm not sure that that's the ideal solution.

Technology changes. And sometimes that means the old rules no longer apply. There are many ways for musicians to earn a good living by making music in 2009. They just can't do it by selling recorded music. The reality is that the technology has changed in such a way that it is easy for anybody to procure any album released without paying for it. And to pine for the old days is like the Encyclopedia Brittanica salesman moaning over the fact that everybody uses that damn Internet and nobody buys his wares anymore. Yep. It happens. And holding to the notion that recorded music belongs exclusively to the musician(s) who created it, and to the record labels that distribute it, is like arguing that the dissemination of knowledge belongs exclusively to the Encyclopedia Brittanica corporation. Not anymore. Things have changed. Deal with it.

The laws haven't caught up with reality. They may or may not catch up. But there's a paradigm shift at work here, and it has nothing to do with honesty and integrity. You can't provide people with a bright, shiny TV and a remote control and expect them not to press the Power button. It's not going to happen. Is it unethical that people can now read the complete works of Shakespeare online, and that they don't have to venture to the bookstore and pay $49.95 for the hardbound edition? The same is true for music. Technology has changed the rules of the game. And the RIAA wants to play by the old rules. It can't and it won't work. Nor should it. The big music labels cannot go away fast enough. And make no mistake, they are most definitely going away.

Just a clarification: she was not found liable for downloading the songs, but for sharing them.

This post totally made me hungry for Taco Bell.

I see this as a sad desperate fighter throwing all of the punches that he/she can, knowing that the end is near and unfortunately a punch landed on a social worker.

I recently had a fellow musician, who is about 17 years old, tell me that ASCAP and BMI called him about his weekly open mic night. He averages 5 players a week. The two companies said stop now or give us $300 a month.

This is a very sad state of affairs. I am with you Andy. I hope this is the end of the RIAA and those that work closely with it.

I completely agree with Andy's commentary here. The RIAA has a marked track record of frivolous suits for unfair amounts.

The supposed "settlements" are often at several times the retail price of the music (I've seen cases of settlements being over 10x the amount).

What's really sad is that, assuming this woman is of average computer user competence, she probably had no clue that when she downloaded a song, that she also was making it available for download (which is the root of these lawsuits). Unfortunately, almost every p2p program out there wants to (by default), scan the hard drive to "add files to the library". Joe User doesn't know that this means "make available for others to download".

Someone said that "she refused to settle and pushed it"...and she should. If a everyday person were to bring such a frivolous suit to court, they'd be laughed out of the courtroom. However, the RIAA gets a free pass to do these sorts of things. We need judges who are specially educated on these sorts of matters to provide a fair sentence to those that are knowingly infringing on copyright agreements.

The RIAA -- and groups like it -- must die before they hurt their own industry any more. Do they honestly think it helps anything to sue their own customers? That sure doesn't make me want to go out and buy a record. Or maybe it's the fact that the label execs get 70 cents on my dollar.

It's also of note that Supreme Court justice nominee Sonia Sotomayor is versed in intellectual property cases like this one. (http://tinyurl.com/soniasotomayorintellectualprop) Bad, bad, bad...