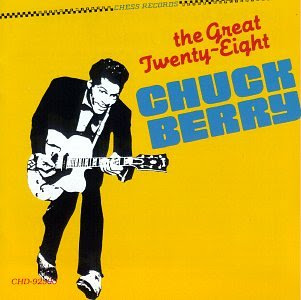 It's all rather passe these days to praise the work of '50s rock 'n roll icons. The 50th anniversary of Buddy Holly's death merited some attention earlier this winter, and Elvis remains a perennial subject of derision and awe, but for the most part the first generation of rock 'n rollers is seen as a quaint reminder of a bygone era, as contemporary as a trip to the drug store soda fountain for a chocolate malt.

And so it was with some surprise that my recent re-exploration of the music of Chuck Berry revealed an artist who still sounds supremely relevant. Chuck, of course, has his share of '50s cultural reference points -- hamburger stands, jukeboxes, long-distance phone operators, American Bandstand shows and Coupe de Villes. In those ways he is perhaps the quintessential '50s rocker. But there is also a timeless and utterly American quality to many of his best songs that extends from his love affair with fast cars (The Beach Boys and Bruce Springsteen obviously took some notes) to the universal celebration of the end of the school and work day, that magical moment when the drudgery is finished and it's time to cut loose and live.

More significantly, Chuck Berry, more than any early rock 'n roller, retained his connection to Chicago blues, and perhaps for that reason his music still sounds utterly contemporary. Chuck, after all, appeared on Chess Records, the label of Muddy Waters and Howlin' Wolf, and although he undoubtedly took his music in a new direction, he still retained the old-school rawness and grit. It's particularly evident in the piano work of Johnny Johnson, the bass work of Willie Dixon, and the slamming drum work of Fred Below, legitimate blues stars in their own right, who sublimated their substantial egos in favor of laying down the barrelhouse rhythms that propelled these rollicking and often sharply observed vignettes of America on the cusp of change. Lyrically, these songs are poignant, funny, and sometimes devastatingly acerbic (hint: "Brown-Eyed Handsome Man" didn't really have much to do with the protagonist's eyes). But musically it's that rhythm section and Chuck's signature guitar licks that are unmistakable. Sure, it's rock 'n roll. These are songs that pretty much define rock 'n roll. But underpinning it all is the blues, and that's a highway that travels a straight line from Muddy and the Wolf through Chuck through The Rolling Stones and The Beatles right on down to The White Stripes and The Black Keys. It's the most constricted and constrained music in the world, and it will never grow old because the real life is in those rhythms, in the grit.

The Great Twenty Eight, shown above, is still the definitive collection. It's a compilation that's been around for decades, and it's still the best, most concise primer on Chuck Berry's music. Every track is essential. The DNA of rock 'n roll is right here -- girls, cars, the celebration of youth culture, the longing to bust out of the routine, the drab, and to make one's mark as an individual. "I dote on myself, there is that lot of me and all so luscious," Walt Whitman once wrote, and Chuck Berry took those sentiments and wedded them to a backbeat and the most distinctive guitar work in the genre. It's marvellous music. And it deserves to be heard in 1959, more than 50 years after Chuck caught Maybelline at the top of the hill.
Posted by Andy Whitman at 8:25 AM