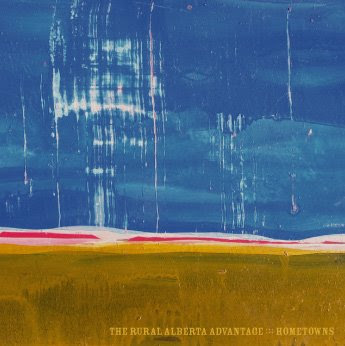 I've never been to Alberta, and I've certainly never been to rural Alberta, which I suppose is pretty much the whole province outside of Calgary and Edmonton. I'm not sure why it would be advantageous to hail from there. More moose sightings, perhaps. But Hometowns, the debut album from The Rural Alberta Advantage, a trio of non-antlered bi-peds who have now migrated to Toronto, makes the case that the windswept prairies are a prime impetus behind their creativity.

Here's the good news and the bad news: Hometowns sounds remarkably like Neutral Milk Hotel. That means you get the kind of furious, barely contained folk punk that NMH perfected on albums such as In the Aeroplane Over the Sea, and that means that at times it's very good indeed. You also, per the inevitable Jeff Mangum comparisons, get a lead singer in Nils Edenloff who sings in an off-key nasal yelp. Minus the Salvation-Army-band-on-acid influences that add much needed texture and variety to the NMH albums, Edenloff is left only with that yelp, a bevy of songs that reference western Canada, and the stalwart work of drummer Paul Banwatt, who bashes the hell out of his drum kit on every song. It's not quite enough, although it's impossible not to be impressed by the prodigious racket.

God knows Edenloff wants you to know where he's from. "The Ballad of the RAA," which kicks off the album, recounts the band's journey from Alberta to Toronto. "The Deathbridge in Lethbridge" namechecks a small Alberta city and its most famous landmark. "Frank, AB" references a mining disaster in the town of the same name. "Edmonton" leaves the rural prairies behind and explores the big city. At times the Neutral Milk Hotel influences are overpowering. "Drain the Blood" is an almost note-for-note recapitulation of NMH's "Holland 1945," complete with overamped guitars and my-skull-is-gonna-explode vocals. But Edenloff is at his best when he tones it down just a notch, as on the ramshackle folk rumble of "Rush Apart," a fine approximation of an early Dylan hootenanny. The album peters out toward the back end, but the first half dozen songs throw down the gauntlet, and constitute the best sustained folk punk attack I've heard since the last Ezra Furman album. The yelp will be offputting to some, but I'm impressed with the raw materials here, and I look forward to hearing what these transplanted Albertans will do in the future.
Posted by Andy Whitman at 11:12 AM

Hey, I'm from rural Alberta, and I have also been transplanted to Toronto. This sounds like my sort of thing. I'm going to check them out.

(Incidentally, the advantages accruing to those who hail from rural Alberta are too numerous to mention. If they were all written down, I suppose that even the whole world would not be large enough to contain them.)