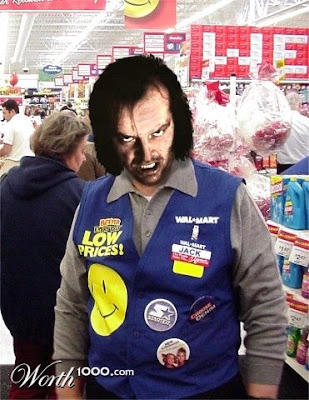 About once per week some well-intentioned friend or relative, after inquiring about my still-unemployed person, suggests re-training. Here is a friendly suggestion: do not suggest re-training to me. I do not receive the suggestion well. It is possible that I could learn to wear a bright blue vest festooned with buttons and chirp "Welcome to Wal-Mart." It is, however, highly unlikely.

Aside from that, I find that "re-training" is one of those words that everyone uses, but no one can define in even the slightest meaningful way. "What do you have in mind?" I ask them. They hem and haw. "Oh, maybe going back to college," they suggest. Ah. Perhaps, after studying Creative Writing, Theology, Education, and Business Administration, the fifth degree will be the charm. I want to tell them that I can already write a sonnet on economic recessions, ponder the soteriological implications of bringing nothing to God (easier today than ever before), teach young, unsuspecting college graduates about the pitfalls of the State of Ohio Unemployment Compensation website, and calculate the return on investment (ROI) ratio on an income of $0.00. I can even quote song lyrics. "Nothin' from nothin' leaves nothin'," Billy Preston once sang. That's all the business acumen you need these days.

America, in the fall of 1929, was like a cicada. It had come to an end and a beginning. On October 24th, in New York, in a marble-fronted building down on Wall Street, there was a sudden crash that was heard throughout the land. The dead and outworn husk of the America that had been cracked and split right down the back, and the living, changing, suffering thing within -- the real America, the America that had always been, the America that was yet to be -- began now slowly to emerge. It came forth into the light of day, stunned, cramped, crippled by the bonds of its imprisonment, and for a long time it remained in a state of suspended animation, full of latent vitality, waiting, waiting patiently, for the next stage of its metamorphosis.

The leaders of the nation had fixed their gaze so long upon the illusions of a false prosperity that they had forgotten what America looked like. Now they saw it -- saw its newness, its raw crudeness, and its strength -- and turned their shuddering eyes away. "Give us back our well-worn husk," they said, "where we were so smug and comfortable." And then they tried word-magic. "Conditions are fundamentally sound," they said -- by which they meant to reassure themselves that nothing now was really changed, that things were as they always had been, and as they always would be, forever and ever, amen.

But they were wrong. They did not know that you can't go home again.
-- Thomas Wolfe, from You Can't Go Home Again, 1938
Posted by Andy Whitman at 2:46 PM

Somebody sure is quoting some Thomas Wolfe as of late. Thanks for turning me onto "Look Homeward, Angel."
-Arthur

Can I advise you not to get re-trained. I hope something job wise happens for you soon. Definitely in my thoughts and prayers Andy.

I won't suggest re-training, lest you sic the guy in that Wal-Mart smock on me. I have been wondering if you are interested in grant writing though. You'd probably be really good at it.