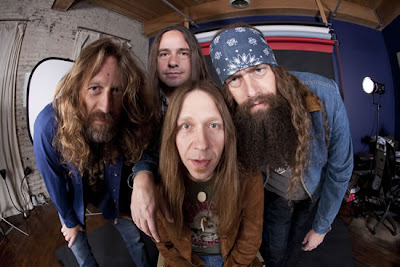 The ghost of Ronnie Van Zant must be smiling.

Blackberry Smoke are four righteous southern rockers who wear the uniform with panache; hair down to the middle of their backs, beards down to the middle of their chests, bandannas firmly in place. They've been genetically programmed to carry on the proud good ol' boy tradition and fast-frozen since 1976. Recently thawed, they've unleashed their second album Little Piece of Dixie upon an unsuspecting public that has forgotten the dubious appeal of pickup trucks, coon dogs, rednecks and longnecks, and the sweet charms of the little missus.

This is admittedly not my favorite genre of music, and I hope you'll excuse me if I fail to hearken back to the glory days of the Confederate flag. That said, these guys do it up just the way Ronnie and the Skynyrd boys used to do it, with sturdy southern rock riffs buttressing Charlie Starr's (is that a southern rock god name, or what?) soulful, deep-fried vocals. "Shake your magnolia," one songs proclaims, and the flower of southern womanhood quivers in anticipation. My favorite is the song where the work-weary narrator begs his woman to hold off on the tales of unpaid bills, the woes of the kids, and the news of politics, religion, and war until he can finish his beer. "I'll get to the bottom of that right after I get to the bottom of this," he tells her. Priorities are priorities. If bands like Lynyrd Skynyrd, .38 Special, and Molly Hatchet bring a nostalgic tear to the eye, then Blackberry Smoke will delight you. Just watch what you put on the back of the pickup truck.
Posted by Andy Whitman at 10:24 AM

Please make these Amazon links if you can - I'd love to send some affiliate love your way when I buy all these things you recommend instead of searching google myself for it.