The Present -- The Way We Are 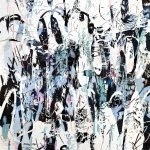 Set the controls for the heart of the sun.

Here's what the press release has to say:

The Present return with an album that delves ever deeper into the human psyche. Like an audio equivalent of Apocalypse Now, ‘The Way We Are’ is by turns terrifying, enchanting, hallucinatory and sharply focused. Like a psychedelic power trio from a mythical dimension, The Present create a music that seems somehow familiar. Like they’ve already seen your dreams and your nightmares.

In order to define the music you’re about to hear it might help to list some of the things it is not: it is not a pop album, neither is it a classical or jazz album. It’s not an ambient album or a rock album either but there are elements of all of these within its dense musical structure.

Touchstones include the music of La Monte Young, Dmitri Shostakovich, Wolfgang Voigt, Cluster, Black Dice, Claude Debussy, Aphex Twin, Can, Arthur Russell, Boredoms and Brian Eno and yet it sounds like none of these.

What it is: a kaleidoscopic trip influenced by New York City, The Ocean, Mountains, The Sun and the Trees, Andy Warhol, Yukio Mishima, David Lynch, Friedrich Nietzsche, Buddhist Mantra, Mass Transit, Cats, Birds and Life. Life in all its myriad complexity and confusions, in all it’s transcendent beauty and it’s horrendous brutality.

Oh my. This is some scary stuff, particularly the references to cats and Friedrich Nietzsche (banjo in the University of Basel Bluegrass Band, as I recall) in a musical context. There are passages that remind me of Gyorgi Ligeti's creepy monolith music on the 2001: A Space Odyssey soundtrack. Others remind me of Ummagumma-era Pink Floyd at their trippiest, with a little Japanese folk song mixed in for good measure. One track is 33 minutes long. You have been warned.

That said, I like it. The Present is primarily the brainchild of one Rusty Santos, who has collaborated with Panda Bear and Animal Collective. This is a strange, eerie, dissonant, and occasionally lovely album.
Posted by Andy Whitman at 1:52 PM