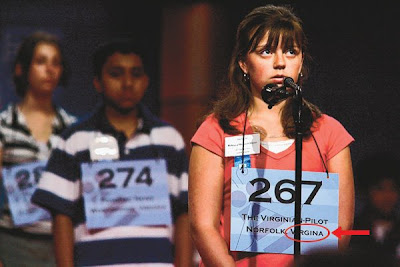 Ah, the sweet memories. In seventh grade I won my school's spelling bee, crushing the local competition by correctly spelling the word "irrevocable." Then I was off to the regional competition, where I choked on "phlegm" (the word, not literally), and was eventually eliminated on "occurrence," forgetting the second "r" and vowing to myself that I would never, ever misspell a word again. I have since failed miserably.

And as proof that spelling is very hard indeed, here is a photo from the National Spelling Bee, showing the misspelled state name of one of the contestants.

It is somewhat mind-boggling to me that I once spent months preparing to compete in a spelling bee. But I did. My father dutifully drilled me night after night, carefully checking my spelling against the Official Spelling Bee Speller. Whatever other issues he had, and he had some, I have to give him props. The man spent hundreds of hours preparing his kid for a spelling bee. Greater love than this few people have.

Last night was the intense final in Washington, D.C. The best spellers in the world congregated in the nation's capital (def: a city serving as a seat of government; not capitol) to watch spelling bee veteran Kavya Shivashankar, appearing in her fourth national competition, prevail thanks to a combination of steely nerves, long hours of practice, and an incredible mind for minutiae and ephemera.

Did I watch? Are you kidding? Lebron and the Cavs were fighting for their playoff lives, and I still hold out the slim hope that the beleaguered, championship-starved city of Cleveland will soon have much to celebrate. Sorry, Kavya. But I was pleased to note that Kavya's winning word was "laocidean," meaning "lukewarm" or "indifferent." Bible scholars the world over rejoice. My daughter tells me that the National Spelling Bee is the occasion for drinking games on every college campus in the country. I wouldn't know. But I take a bit of rueful pride in the fact that millions of people now watch these kids compete. Cheers.
Posted by Andy Whitman at 8:24 AM

I switched back and forth between the Cavs and the Bee.

This year's contest was more entertaining than year's past. The kids looked like they were really having fun up there.

I watched the spelling bee last night. I took out a pen and notebook and tried to see if I could spell the words...and I couldn't. I was, however, pleasantly surprised to see my dictionary.com "word of the day" - avoirdupois - featured in the Bee.