The Hotel Chelsea, Thomas Wolfe, and the End of Romanticism 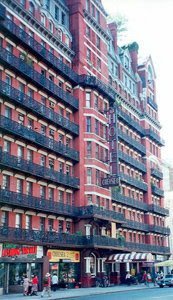 And left alone to sleep within a shuttered room, with the thick sunlight printed in bars upon the floor, unfathomable loneliness and sadness crept through him: he saw his life down the solemn vista of a forest aisle, and he knew he would always be the sad one: caged in that little round skull, imprisoned in that beating and most secret heart, his life must always walk down lonely passages. Lost. He understood that men were forever strangers to one another, that no one ever comes really to know any one, that imprisoned in the dark womb of our mother, we come to life without having seen her face, that we are given to her arms a stranger, and that, caught in that insoluble prison of being, we escape it never, no matter what arms may clasp us, what mouth may kiss us, what heart may warm us. Never, never, never, never, never.
-- Thomas Wolfe, from Look Homeward, Angel

Almost a year and a half ago, on a raw January day, I strolled from midtown Manhattan down to Greenwich Village. Subways are great, and no doubt part of the full NYC experience, but for me there is no substitute for walking, for absorbing the sights and sounds, the aromas and the stink, the honking horns, the soft pretzel vendors hawking their wares on every street corner, the army of the corporate drones marching to work, iPod earbuds firmly in place.

One of the places I passed was the Hotel Chelsea. There may be more famous hotels on the planet, but I'm not aware of them. This one has certainly seen better days. It's seedy, tawdry, and full of history, both good and bad. It's housed Mark Twain, Dylan Thomas, William S. Burroughs, Tennessee Williams, Jack Kerouac, and Thomas Wolfe. Stanley Kubrick, Milos Forman, Dennis Hopper, Uma Thurman, and Jane Fonda once called it home. Bob Dylan, Jimi Hendrix, Leonard Cohen, and The Ramones wrote songs here. Sid Vicious murdered his girlfriend here, and caught the place on fire. The Last Outpost of Bohemia, some have called it. Given its subsequent history in my life, The Last Outpost of Romanticism might be more accurate.

If there are ghosts, surely the Hotel Chelsea must have its share. I admire many of them; loathe a few more. But of those many spectral bohemians who have impacted my life, and who have once called the Hotel Chelsea home, it is Thomas Wolfe who haunts me. Because I walked by that old hotel, thought about the one former resident whose words still burn in my soul, and set off on a quest to discover if the old magic was still there. 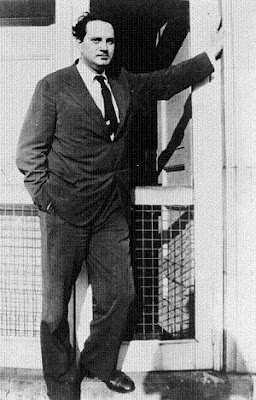 The way it happened was this: I was sixteen years old. My goals were modest. I wanted to write the Great American Novel, dazzle college-educated audiences as a talking head on various PBS specials, and eventually appear as the question to an answer on Jeopardy. I asked my creative writing teacher a sensible question: who is the greatest American novelist? If you're going to be the best, you might as well understand your competition, right? "Thomas Wolfe," he unhesitatingly told me. "Read a book called Look Homeward, Angel. If you want to be a great writer, you can't do any better than to learn from Thomas Wolfe."

So I did. I read Look Homeward, Angel. Then I read the massive, two-volume Of Time and the River. Then I read the posthumous novels The Web and the Rock and You Can't Go Home Again. And let it be known that there is no more perfect, or no more dangerous, writer than Thomas Wolfe for rhapsodically delirious sixteen-year-old kids. Wolfe's hyperventilating, floridly poetic, impossibly romantic prose was pitched perfectly for hormonal adolescents, particularly the kind who are convinced of their impending greatness and heightened emotional sensitivity. And by the time I was eighteen, I had learned, and I had emulated. Thomas Wolfe was, to quote a phrase that didn't come into vogue for a few decades afterwards, da bomb. His words detonated in my heart. I couldn't imagine a more perfect writer.

There is a famous, or perhaps infamous, story of Thomas Wolfe emerging from his cramped room in the Hotel Chelsea at 3:00 a.m., prowling the streets of lower Manhattan, manuscript in hand, and shouting at the top of his lungs, "I wrote ten thousand words today! I wrote ten thousand words today!" For those who need to translate, ten thousand words is about twenty pages, single spaced, typed. It's a lot of writing. And it is typical of the life of Thomas Wolfe. Thomas Wolfe didn't write. He spewed. Like the big, outsized man he was, Wolfe did everything to excess. He ate a lot, drank a lot, poured forth reams of words in staggering binges. He was the ultimate romantic, and he embodied the stereotype that to produce great art one must suffer. It was all about the pain.

Re-reading his words over the past year and a half, prompted by that revelatory stroll past the Hotel Chelsea, I still understand the fuss. Wolfe's writing is largely discredited these days. He never met an adjective or twenty he didn't like. He was sexist and anti-Semitic. He was, by all accounts, something of an asshole in his personal life. He was most certainly an alcoholic. None of these things speak in his favor. But he was an undeniably powerful writer, capable of spewing forth words of breathtaking beauty, of unmatched pain. There are passages in Look Homeward, Angel that still move me to tears.

But my 53-year-old self now views my 16-year-old self with a bit of mistrust and smirking pity, and the same reaction transfers over to my view of Thomas Wolfe. Sometimes -- many times, actually -- life isn't hypercharged. It's just life. Much of it is merely okay, and even when it's not -- when the days seem particularly glorious or particularly tragic -- it still strikes me that other people go through the same shitty, majestic, mediocre deal, and that the best course might be finding common ground with them instead of searching for evidence of one's heightened, passionate superiority. I'm through with the kind of romanticism Thomas Wolfe embodied. It's the kind of philosophy that can leave you with the DTs, and dead just shy of 38. Such was the fate of one of my idols. I still love him. And I pity him.

For what it's worth, I thought about turning into the Hotel Chelsea, exploring those ghost-haunted rooms. I didn't. I walked past.
Posted by Andy Whitman at 11:29 AM

Wolfe's a favorite of mine. Got to give props to his editor, Maxwell Perkins, for having infinite paitence with the huge piles of manuscript he was given.

So a few years ago I mentioned I'd like some more Tom Wolfe for Xmas. I ended up with a shelf of Thomas Wolfe instead...

But it's a fine time to revisit one of Jack's favorite authors, even if he's not a white-suited man in full. Now that I've suffered a few bonfires of my vanities, he maybe the right stuff after all.

Ha! I'd bet you're not the first person that's happened to, Grant. And sure, I can see why Jack was a fan. Jack and Tom are two of a kind -- hopelessly romantic, hopelessly incapable of self-editing, often great.

very very rich, andy. you do indeed understand, plumb, and even articulate (bearing witness to) "the fuss" over and over again. than you for doing so.
and thanks too for the generous and invigorating words a post or two below.
fondly,
jdd

Thanks for your kind words, David. And you're quite welcome. Your latest book is confirming some long-held views, and challenging some others. I can't ask for any more than that. I'm very thankful.

After Wolfe had done so, he was reinfected and sent back to his own time to die.

i've never read a word of Tom Wolfe, but the story managed to stick in my brain anyway.

You should have stopped by. We could have introduced you to Wolfe's ghost.
www.chelseahotelblog.com