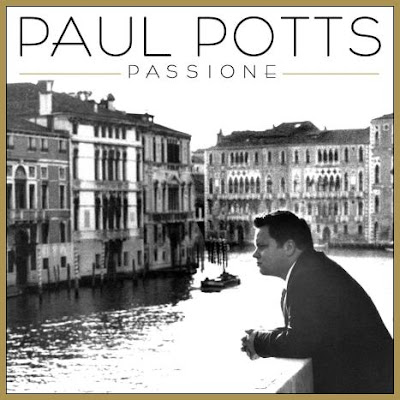 Before there was Susan Boyle, there was Paul Potts, astounding the world as a chubby little cell phone salesman who could sing opera. Imagine. Fat people could sing. Even on TV.

So there's Paul, on the cover of his second album Passione, which I'm going to take a wild guess is Italian for "passion," looking broodingly out over Venice's Grand Canal. If you had translated Roberta Flack's "The First Time Ever I Saw Your Face" into Italian, and actually had the audacity to call it "La Prima Volta," you might brood, too. Here's the deal: Italian is cool, and makes people feel all sensitive and sophisticated and brooding. You will be able to listen to this album and instantly feel, like, urbane and cosmopolitan. Even with Andrew Lloyd Webber.

Paul doesn't do much to vary the formula that made his debut album such an international hit: mix in a couple operatic arias, a couple pop staples, and a soupcon of Broadway (okay, sorry, wrong language), slather on the bombastic string arrangements, and belt the hell out of all of them. In Italian. And so we have the aforementioned "La Prima Volta," Nino Rota's "Un Giorno Per Noi" (Italian for "A Time For Us"), Procol Harum's immortal recitatif "Senza Luce" (Italian for "A Whiter Shade of Pale"), and something called "Mamma" (Italian for "mamma"). It will probably sell a zillion copies, and all the PBS listeners will bask in their sophistication and in their support for the underdog. And cornpone is still la cornpone, even when you translate it.
Posted by Andy Whitman at 6:09 PM