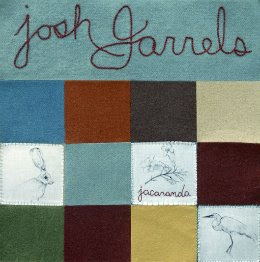 Josh Garrels writes overtly Christian songs that are too idiosyncratic and prickly to fit within the confines of the CCM industry. That probably consigns him to a day job that is, at best, his second choice. But the musical rewards are many, and are readily evident.

On Jacaranda, his third album, Garrels simply does what he’s done before, but better. At heart a gentle folkie, Garrels picks his guitar (and what sounds like the charango, although the instrumental credits don’t tell), and sings his contemplative, mystical songs. His subjects – the wonders of the natural world, the still, small voice of God, the sorrows and joys of life on a fallen, dazzling planet – call to mind a young Bruce Cockburn, drunk on beauty, ripped apart by injustice and casual indifference. They are complex, nuanced, and lovely.

The two instrumentals that bookend the album set the tone: pastoral, quiet, soft enough to allow room for the chirp of crickets and the song of birds. In between the music shimmers and shines and continually escapes easy categorization; a straightforward folkie ballad here, a neo-soul workout with a hint of electronica there, a reggae-tinged spiritual lament here, a Peruvian cumbia there, with a choir of the angelic host breaking in occasionally just to mix things up. Garrels’ voice is wondrously supple throughout, and it’s a joy to listen to him soar into a pure, soulful falsetto. He sings about the birth of a child, the funeral of a loved one, the desert fathers of the early Church, the exploitation of the poor, the soul-crushing demands of the drab and routine, the subtle joys of walking by faith in the darkness. It’s a kaleidoscope of an album, every pattern reflecting an unseen but loving hand. It will probably sell squat, and it doesn’t have nearly enough uplifting choruses and grace/face rhymes. You can remedy that somewhat by buying it anyway and striking a blow for quietly uplifting, sorrowful, real, and transcendently hopeful music.

100% agreed. the album is fantastic. i'm happy to see it getting (some) exposure.

we are entirely on board, here. pre-ordered and received, it's been on non-stop rotation and the kids are being indoctrinated.

josh garrels puts on, also, one of the better all-around live shows, whether you're into christian mystics or beats-and-acoustic-guitar, or just plain music.

Josh Garrels,
I have you "Stone Tree" album. It is awesome, I love your style. I was wondering where I can pick up your most recent album.

Josh's music is wonderful -- been listening to the new CD constantly since I got it!

Picked up both Jacaranda and Open Oceans after reading Andy's review in Christianity Today, and have been immersed in both for two weeks. As a 30-year fan of Bruce Cockburn's music I agree with the comparison, but of course, Josh is a product of his times and makes use of world beats, electronica, and other things, all to great effect. The whole is greater than the sum of its parts - uplifting, soulful, inventive music done very, very well.

Jacaranda is the best yet!! Agreed, Josh has 'it', thank you man for sharing your heart.
Andy, I'm looking for your email address..mine is whatis2come@yahoo.com if you get a sec.

Got Josh's newest album in the mail today, Lost Animals. Its great, has a similar feel to Jacaranda. You can preview it at his website joshgarrels.com.

I have literally been blown away by Josh's music. Words are pitiful in describing how I feel. I just pray that he always writes and sings...always. The music is...honest. That's all I can say.