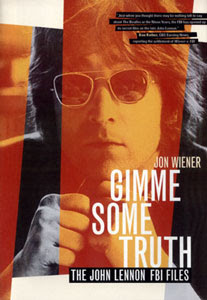 I've had enough of reading things
By neurotic, psychotic, pig-headed politicians
All I want is the truth
Just gimme some truth
-- John Lennon, "Gimme Some Truth"

Here's a National Review Poll from September 19th that proves conclusively that John McCain shaved off 8 points from Barack Obama's lead last week in terms of voter perception on which candidate could best handle an economic crisis.

Yeah, well, I'll see that poll, and raise you a poll.

The next day, the September 20th Gallup Poll showed Obama ahead 50% to 44%, and with a lead that had widened over the past week.

Umm, sure. So ... who do you believe? For what it's worth, I wouldn't make too much of any of it. It's just a recognition that in the too-much-information age we can find anything, and usually multiple anythings, to substantiate our particular views and biases. We can certainly find "scientific" polls and polls of polls.

It makes me wonder how one can be an informed voter. I'd like to be an informed voter. And there is no lack of printed and pixelated material that passes for information. But from what I've seen (and I include myself in this as well), we tend to retreat to our favorite publications and web sites and blogs that reinforce our own preconceptions and that say what we want to hear.

My own contribution to information overload: I would bet that 90% of the American voting population views the upcoming presidential election as enormously important, one that will have very significant impacts on the future of America. And I would bet that 90% of the voting population believes that it is impossible to receive accurate, objective, unbiased information about the two major candidates. So we make our voting decisions based on our preconceptions and biases, just as we always have. But this time we add a veneer of objectivity to it, and we can provide multiple hyperlinks to prove it.
Posted by Andy Whitman at 9:19 AM

True, both campaigns are anything but "no spin zones," and anything coming from either camp should be viewed with an appropriately jaundiced eye. But this analysis seems more suited to a pre-Internet era of major-media dominance. Now, thanks to sites like Snopes.com, factcheck.org and realclearpolitics.com you can absolutely ferret out real information about the candidates' policies and proposals. You don't have to get caught up in spin overload from either side (DailyKos or RedState) -- just look at what the candidates themselves are saying (positions are usually well delineated on their websites) then run it through one of the impartial filters mentioned above. And if you still need more, you can usually find original documents to provide records of votes, bill texts and more.

I think the bottom line is, whether being spoon-fed by Cronkite or drowning in a sea of blogs, people are lazy and irresponsible. We all know that even if everything said by each campaign was 100% accurate and civil, there are people who'd still vote for the better looking or better sounding guy.

i tend to check out this site for polling data. it averages out all polls -- hopefully giving the truest representation

I seriously doubt that most people are informed. Most people like to be spoon-fed and believe everything they hear. And most will look at you like you are somebody recently escaped from the looney bin if you even mention the idea of a 3rd-party candidate. Similar to the experience I had when a Kerry volunteer came to my door in 2004. "Blah, blah, blah, this election is so important, blah, blah, blah, Kerry is so great, he's going to do this and this and this, blah, blah, blah". At the end of the spiel the conversation went like this "So do you think you will be voting for John?" "No." "Oh (disgusted condescending tone), so you're voting for Bush (statement, not question)." "No." "Oh (further condescending tone), so you're not voting." "I didn't say that." Well, (agitated tone) then what are you doing?" "I'm voting for a 3rd-Party candidate." "Oh (tone and look of, ah, you are one of those nutjobs)." Stands there uncomfortably for a second, sighs, leaves.

But right now, in the absence of viable third-party candidates, it's a throwaway vote in terms of helping to determine the outcome of a presidential election. I try to weigh that against my distaste for either or both of the major-party candidates. Up to this point, my desire to have my vote matter (it's the only one I've got) has always outweighed whatever distaste I have for the candidates. I hold my nose and push the buttons.

What's at stake in this election:

"This is the state of our great republic: We've nationalized the financial system, taking control from Wall Street bankers we no longer trust. We're about to quasi-nationalize the Detroit auto companies via massive loans because they're a source of American pride, and too many jobs — and votes — are at stake. Our Social Security system is going broke as we head for a future where too many retirees will be supported by too few workers. How long before we have national healthcare? Put it all together, and the America that emerges is a cartoonish version of the country most despised by red-meat red-state patriots: France. Only with worse food.

Admit it, mes amis, the rugged individualism and cutthroat capitalism that made America the land of unlimited opportunity has been shrink-wrapped by a half dozen short sellers in Greenwich, Conn. and FedExed to Washington D.C. to be spoon-fed back to life by Fed Chairman Ben Bernanke and Treasury Secretary Hank Paulson. We're now no different from any of those Western European semi-socialist welfare states that we love to deride. Italy? Sure, it's had four governments since last Thursday, but none of them would have allowed this to go on; the Italians know how to rig an economy.

You just know the Frogs have only increased their disdain for us, if that is indeed possible. And why shouldn't they? The average American is working two and half jobs, gets two weeks off, and has all the employment security of a one-armed trapeze artist. The Bush Administration has preached the "ownership society" to America: own your house, own your retirement account; you don't need the government in your way. So Americans mortgaged themselves to the hilt to buy overpriced houses they can no longer afford and signed up for 401k programs that put money where, exactly? In the stock market! Where rich Republicans fleeced them."
-- Bill Saporito, "How We Became the United States of France."

Andy, you are welcome to have whatever view you like on politics. I'm more than cool with that. However, calling my vote a throwaway vote, well, that makes me laugh. One of the reasons its nice to have a democracy, is that we have the ability to have a choice of who we vote for, granted they are on able to follow the guidelines required to get on the ballot (and even then you still the ability write someone in). There are reasons that there are no "viable" 3rd-part candidates and that has plenty to do with the media, the presidential debates (the debate commission is run by former heads of the two major parties), and a general lack of effort by the common voter. Voting is a priveledge, one that is often not taken seriously by most people. And one that is not even exercised by countless millions. If you feel that Barack Obama is the most qualified candidate that will take the country in the direction you feel best, then I encourage you to vote for him. But please, don't tell me that my vote does not matter.

I'm with Scott on this one. I have had the pleasure of voting in two presidential elections, and in both cases, I voted for a major-party candidate. In '00, I did so gladly. In '04, I held my nose.

Fast forward 8 years and all the people I thought were loonies all of a sudden make a lot of sense to me. This November, I will cast my first non-major-party vote in a national election. I imagine it is going to feel great.

My reasons aren't revolutionary, except to me. I believe the two-party system is a false dichotomy that's fed to a lazy voting public, and I personally refuse to feed the beast anymore. It is my personal belief that casting a vote for the "lesser of two evils" is still making a deal with the devil, and I'm not taking the bait this time. (Go ahead, try to string together more cliches in one sentence. Try!)

My candidate will not win, and I have resigned myself to a skeptical hopefulness on the morning of Nov 5. I'll have slept well, and will continue to, knowing that I voted my conscience, and not my fear.