Where Is the Prog Love? 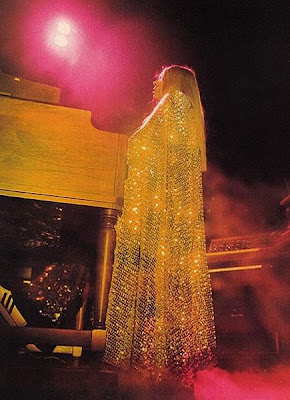 It's gotta be the shimmering robes. Once again the Prog wing (Yes, Emerson, Lake and Palmer, Genesis, Jethro Tull, and if we're feeling rationally self-interested, Rush) has been snubbed by the Rock 'n Roll Hall of Fame.

Granted, Rick Wakeman (the keyboard player for Yes pictured here) is the poster child for Modern Elfwear, not for the snarling adolescent rebellion for which rock 'n roll is known and loved. And yes, it's hard to imagine Galadriel and the Hellcats. But still ... those bands made a lot of great albums and played a lot of great shows. No, really. And it's high time for a critical reassessment of the music.

Taking nothing away from this year's nominee Iggy Pop, who could bludgeon with the best of them, the Prog wizards made complex, beautiful, and frequently moving music, and they could play their instruments extraordinarily well, a fault for which they were summarily dismissed during the heady days of punk. But maybe we should rethink that. Yes, there were wretched excesses, and if I never hear another Toccata and Fugue on a Theme from The Hobbit again, I will be quite happy. But Fragile? Close to the Edge? Selling England by the Pound? Thick as a Brick? Brain Salad Surgery? I'll take any and all of the above over the Neanderthal leer of "I Wanna Be Your Dog."

But that's just me. I do know this: it's all theater. But somewhere along the way the keepers of the rock 'n roll canon decreed that bodies smeared in blood were cool and bodies covered in shimmering robes were not. Whatever. I'll continue to go my unhip way and champion the wizards.
Posted by Andy Whitman at 10:25 AM

I had no idea Rick Warren played for YES.

maybe my recall is fuzzy, but i think p. gabriel may have performed smeared in blood, or something like. he shaved his forehead, at least, right?

John, right you are on Rick Warren. His "Synth-Driven Life" was his first book.

jnf, you could be right about Peter Gabriel. I know for a fact that he performed in winged headgear, as an amorphous, wart-covered blob, while wearing what appeared to be a Roman Centurion helmet, and with mixed fruit on his head. The blood would not be surprising.

Here! Here! And rally forth! You are again, Spot On, Andish of Whitman.

I just started visiting your blog and it's great. I agree with you on this. I'm not a huge prog guy but in looking at this year's nominees, the fact that War is included is ridiculous. Were they great? Maybe. Were they prolific? Sure. 200 years from now, will we remember anything other than 2 or 3 songs?

My vote is that instead of inducting 7-10 artists/producers, etc. per year, keep it to 3 or 4. The honor is totally diluted at this point.

And yes - Genesis deserves it. Not as much as Iggy Pop, though.

As far as Tull is concerned, all they have to do is listen to Hymn 43.

That is Rock and Roll.

I totally absolve myself of the R & R hall, since Madonna was inducted. Mariah and Britney will make it someday, and I won't be listening.