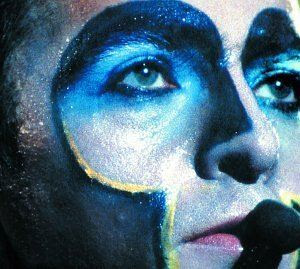 I'm enjoying this one immensely. The remastering sounds great. The original albums stack up about the way I remembered them. Trespass is mediocre, Nursery Cryme and Foxtrot are good-to-great, and Selling England By The Pound and The Lamb Lies Down On Broadway are the twin pinnacles of prog rock. The disc of previously unreleased rarities has a couple inconsequential tracks, and half a dozen absolute gems.

Of course, all this is predicated on the notion that ten-minute songs featuring odd time signatures and mellotron solos are worth your time and attention. Nostalgia is certainly a factor for me, but I also believe that Sigur Ros, Muse, and Mars Volta fans might find value in discovering where their contemporary heroes found their sound. And Peter Gabriel is Peter Gabriel, one of the most strikingly original and theatrical singers and songwriters in the history of rock music.

And speaking of theatrical ... the 3.5 hours of concert video footage is worth the price of admission by itself. I haven't gotten around to the other 3.5 video hours of the band, in 2007 Boring Old Fart mode, sitting around the old hearthstone and reminiscing about the grand, weird days. But the concert footage from the early '70s is spectacular. I particularly love the footage from The Midnight Special, an early '70s late-night musical revue hosted by uber-DJ Wolfman Jack. This is a show that regularly featured the likes of Helen Reddy and David Cassidy. Seeing Peter Gabriel on the program in full winged-headgear regalia, looking like a nightmare version of the Flying Nun, is priceless.
Posted by Andy Whitman at 10:46 AM

Peter Gabriel? There was a band called Genesis before the one with Phil Collins at the mic?

I've never heard of such a thing...

Indeed, John. At the time (1975), Peter Gabriel's departure from Genesis to start his solo career was viewed as the end of the world by hardcore Genesis fans. Peter Gabriel *was* Genesis. They seemed to carry on all right with that Phil guy, though.

Genesis fans have long lined up in Peter vs. Phil camps. Personally, I think it's kind of silly. I like both versions of the band (although they're quite different), and some of the late
'70s and early '80s Genesis albums with Phil are absolutely great. Still, I have a soft spot in my heart for these early years with Peter Gabriel. Phil never wrote songs with titles like "The Return of the Giant Hogweed" or "Can-Utility and the Coastliners." Ah, memories.

I was actually kinda joking. But yeah, I never heard any pre-Phil Genesis growing up.

I like this box set more and more, and think it has a shot at being one of the best box sets ever released, even though at this point I have only rough copies of the artwork, and CDs and DVDs labeled in magic marker. It isn't officially released until November, I believe. But the music, with the exception of "Trespass," is stunning, and the video footage is mind-bogglingly great. The classic lineup -- Peter Gabriel, Tony Banks, Mike Rutherford, Steve Hackett, and Phil Collins (who is simply a monster drummer) -- combined true musical virtuosity, astounding creativity, and jaw-dropping visual theatrics. There's just a wealth of greatness here. It's such a pleasure to come back to this music and discover new facets of complexity and beauty I missed the first time around. And this is from a guy who routinely pokes fun at prog rock.

In my opinion Genesis was a mind blowing creative entity until the beginning of the eighties when it happily became a profitable music industry.
Steve Hackett departure was one of the most important symbol of Genesis' revolution...