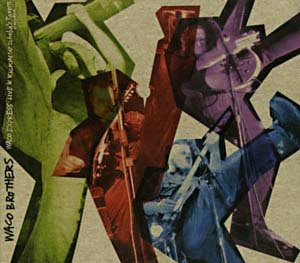 In the taxonomy of local watering holes, Yuppie Fern Barn probably anchors the genteel, tame end of the scale, while Roadhouse probably stands menacingly at the other end. Campus Dive, my own choice for the best place to catch live music, is probably just to the genteel side of Roadhouse.

I've been to Schuba's Tavern in Chicago, and it's neither Fern Barn nor Roadhouse. But you'd never know it by the latest live album from UK shitkickers The Waco Brothers, who turn an otherwise staid and proper establishment into a rowdy juke joint where you're just as likely to have a bottle knocked upside your head as you are to have it placed on your table.

It's all in the attitude. Lead singer/songwriter Jon Langford uses the Wacos as his redneck alter ego, but he's best known as the leader of Leeds punk band The Mekons (and if you don't own The Mekons Rock 'n Roll, you're missing one of the greatest albums. Ever), and he and his bandmates bring the punk vitriol and raw passion to every song on this collection. Presiding over the proceedings with a querulous Joe Strummer yelp, Langford half sings and half chants his acerbic populist anthems, investing them with the kind of damaged soul that Strummer brought to every Clash song. But this is piledriving rock 'n roll music with a Stetson, and steel guitarist Marc Durante is an equal partner in the mayhem. Imagine the Sticky Fingers-era Rolling Stones fronted by Strummer and playing while well lubricated. That's the sound of this album, and that's the swagger that Langford and his bandmates capture perfectly.

The Waco Brothers albums are, quite honestly, spotty, but there's no filler here. Think of it as a louder, looser, more ragged, and more glorious Greatest Hits album for a band that has never had a hit. It's a wondrous thing, by far my favorite live album that has been released this year. And by listening from the comfort of your own home, you avoid the risk of that bottle upside the head.
Posted by Andy Whitman at 8:25 AM

Thank you Andy, for being someone that is giving The Mekons some props. It is well deserved.

Jon's a very cool dude. We met years ago in Nashville. We've talked about doing a record together but never made it happen. Maybe we still will...