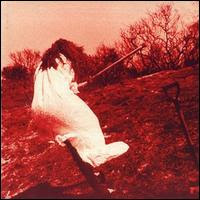 Some extended commentary to go with my earlier posting ...

I only know of three songs that have been written about the Cuyahoga River: R.E.M.’s “Cuyahoga,” Randy Newman’s “Burn On, Big River” and Adam Again’s “River on Fire.” They’re all great, but I’ll give the nod to Adam Again.

For most of Dig, Adam Again frontman Gene Eugene does a very passable Michael Stipe imitation, and his band excels at mimicking the frenetic jangle pop of R.E.M. But “River on Fire” is something different. It’s slow, labored, hesitant. It’s the chronicle of a man and a woman who love one another, and who can’t stay together. The singer struggles to find the right language, the proper ways to express his bewilderment and confusion. He sifts through the relational rubble to figure out what went wrong. “I’ll grab a metaphor out of the air,” he sings, and then he does just that, finding the perfect image for a marriage that should have been lifegiving, that should have been sustaining and nurturing and lovely, and that was ending in bitterness and recrimination.

I know a lot about the history of Cleveland, Ohio
Disasters that have happened there
Like the Cuyahoga River on fire

He found his metaphor. It’s probably the most devastating divorce song I’ve ever heard. 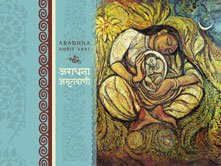 I’ve already written about Aradhna, right here. What I said. 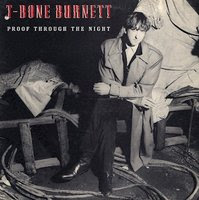 T-Bone Burnett – Proof Through the Night

T-Bone’s a hotshot producer (O Brother, Where Art Thou?, Elvis Costello, Counting Crows, and dozens more), but he’s also carried on an intermittent recording career of his own. Proof Through the Night is my favorite of his nine albums, but they’re all worthwhile. The title is a nod to Francis Scott Key (as in “gave proof through the night that our flag was still there), not Bruce Springsteen, and as such the album serves as a State of the Union address for God’s own U.S. of A., circa 1983. T-Bone finds a culture obsessed with image (the homage to/lament for Marilyn Monroe called “Fatally Beautiful”), image (the delightfully skewed “Hefner and Disney”) and image (“Hula Hoop,” which starts out with the arresting verse Way up in the hierarchies Mr. Big picks up his horn/Floats a note down through the lowlands and another star is born/Then he turns another billion and he deals a little porn). If you’re picking up on the notion that T-Bone isn’t charmed by what he sees, you’d be right. And he recruits a trio of pretty fair guitarists to help him out – Richard Thompson, Pete Townshend, and Ry Cooder.

Incidentally, Proof Through the Night was the first and only “Christian” album to receive a warning sticker from the PMRC, the one-time watchdog committee headed up by Tipper Gore. The reason? A song called “The Murder Weapon,” which suggested violence. The context of the song was a commentary on the power of the tongue, as found in the Book of James. This stuff is too good to make up. 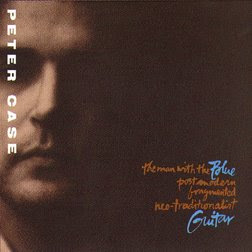 I first encountered Peter Case in the movie “Valley Girl,” which was a smart update/transplant of the Romeo and Juliet story to suburban L.A. That was Peter fronting the bar band, which in this case actually turned out to be his bar band/power pop band called The Plimsouls. TMWTBPFNTG (I’m not going to type it all out again) is his second solo album and, in spite of the unwieldy title, it’s a pretty straightforward folk-rock commentary on what happens when all the usual suspects (sex, drugs, rock ‘n roll) turn out to be insufficient. There’s a great, poetic reflection on adolescent rebellion (Mixed up kid is here to join the crowd/The ones who only fit where they’re not allowed/He’s out on the streets and feelin’ blue/With a hole in his soul that the wind blows through). There’s a superb commentary on the inscrutable and overwhelming love of God (“Hidden Love”). And there’s a harrowing narrative on homelessness, and the studied indifference with which we greet it, on “Poor Old Tom,” which concludes with the devastating couplet: 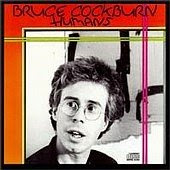 I know I said my list was in alphabetical order, and that no favorites were implied. And that’s true. But here’s a secret. Humans is #1. I don’t know what it is about divorce. I wouldn’t wish it on my worst enemy, but there have been times – many times, actually – when the hypercharged days leading up to the bad ending of a good relationship have produced music of uncommon beauty and power. See Adam Again, above. See also Beck, Bob Dylan, Richard and Linda Thompson, Van Morrison, Jacob Golden, and The Mendoza Line.

And see Humans. Up until this point in his career (1980), Bruce Cockburn was a gentle soul and a hippie Christian mystic, spinning out his tales of the beauty of nature and the wonder of sunsets and the Northern Lights, etc. etc. Then the shit (all natural, biodegradable) hit the fan, and the course of his life changed. Humans finds him mid-way through the carnage, and finding blood everywhere, including on his own hands.

The trio of songs that conclude Side 1 of my gloriously scratchy vinyl copy (“More Not More, “ “You Get Bigger as You Go,” and “What About the Bond?”) maps out the terrain in stark, brutal strokes:

Side 2 brings some tentative resolution, but it’s bought at a high price (Bloody nose and burning eyes/Raised in laughter to the skies/I’ve been in trouble but I’m okay/Walls are falling but I’m okay/Under the mercy and I’m okay). It’s a remarkable, devastating album, a song cycle that suggests that there are no easy answers, but that there are answers. It’s easily one of my Top 20 Desert Island discs.

I have heard several good things about Peter Case, and now I am sufficiently motivated to get this album.

"Proof Through The Night" is a great album - for me, the period from "Truth Decay" through "Proof..." produced my favorite T Bone albums.

"Put Down the Gun" off that Peter Case album is probably my favorite track of his...

Thank you for summarizing these albums. Can't wait for the rest!

Okay, we're nowhere near S, but I have to nominate Marty Stuart's Souls Chapel, a combination of covers and some new material, and one of the most roomy, analog-sounding albums I've heard in years. It's guitars, bass, drums, Hammond B3, and great voices (including that of Mavis Staples). It's wonderfully uplifting. And it inspired me to buy The Staple Singers' Freedom Highway, another killer album.