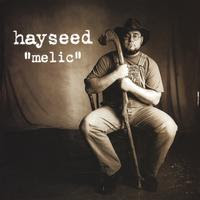 Last Thursday night I spoke at a fun and challenging gathering of Columbus artists called Wild Goose Creative; a group of writers, musicians, actors and actresses, and visual artists who come together once per month to share their work and support one another. There were a few people from my church and many people I didn't know. Since this was my first public speaking opportunity that didn't take place on the campus of a Christian college/university, I reveled in the absence of unanswerable and fundamentally misguided "What are five rules we can use to determine what Christians should listen to?" questions and I rejoiced in the genuinely excellent work I saw all around me.

Afterwards, a big, hulking mountain of a man came up to me and introduced himself as Hayseed. He was wearing overalls. He looked the part. Underneath the overalls was a t-shirt sporting the logo and name of The Bad Livers, one of the most debauched and funny bluegrass bands most people have never heard. Hayseed wanted me to listen to his music. "Sure," I said. This isn't that unusual at these kinds of events. People want me to listen to their music and write about it. And I try my best, although I make no promises. I can't write about everybody. On the other hand, if I can shine my little light on some deserving musicians, then I'm more than happy to do so. So Hayseed went out to his car and brought back a couple CDs for me. They were called Melic and In Other Words.

Holy hoedown, Batman. Where has this guy been all my life? Let's start with a quote from Lucinda Williams:

"Hayseed is, in my mind, on the same level as Bob Dylan and Neil Young and Van Morrison. That's just what I think, that's my opinion, for what it's worth. I don't say that about everybody who comes down the pike."

Is he that good? Nah, he's not that good. But maybe Lucinda was exaggerating to make a point, and the point is that Hayseed writes songs that borrow equally from the Bible and T.S. Eliot and P.B. Shelley and his own scuffed soul, and he sings them in a huge, untamed voice that recalls a young George Jones. He's got that wild Kentucky high lonesome soul that can't be faked, he's got a great old-time country band behind him, and he writes some of the most literate and soul-searching music I've heard in months.

Instrumentally, these are old-time country albums, with a twist of Delta blues. They are most certainly not bluegrass, although banjos and fiddles are featured prominently. Lyrically, they sound like the work of a philosophy/theology major. And he's recruited a few fairly decent folks to help him out, among them Lucinda Williams, Emmylou Harris, Joy Lynn White, Doug Dillard, and Bruce Cockburn guitarist Colin Linden. Imagine, then, a song called "God-Shaped Hole," which is a concept borrowed from St. Augustine, and imagine that indispensable Christian concept delivered as a holy hoedown. That's what you get on these two albums, with a vocalist who understands soul in all its theological and sonic nuances.

These albums are apparently ten and four years old, respectively. God only knows why they didn't leave more of a mark. No Depression ran a couple flattering reviews, and that was about it. Hayseed grew up the son of a Pentecostal preacher in western Kentucky. His family didn't own a TV, or listen to the radio. And then the kid struck out on his own and started reading Augustine and Eliot and Shelley. And so what we end up with here is something that literally sounds out of time. It's perhaps the most unabashedly culturally unaware music I've ever heard, it's crackling with all the big questions about God and love and life and death, and it's full of the joy of self-discovery. I'm very glad I listened. I think you will be too.
Posted by Andy Whitman at 9:28 AM

This is the first artist I've been introduced to on your blog that I've liked.

Awesome. I'm one for whatever.

I love what you say about Hayseed's music being out of time. Thanks for expressing the surprise and joy that I also felt when I first encountered Hayseed's work!

keep your eyes peeled, because he might just make another appearance at a third thursdays in the somewhat near future!

Glad you enjoyed Hayseed. He's been on my CD player for several months. More Hayseed at Wild Goose - yes!

Hey, man! Thanks for the kind words. Beth Dekker sent this link to me. I sure am honored by your response to my music.

I'm also honored by the comments the others have left here. Oh, and by the guy who went to my website and ordered both records! Thanks, Mark!

Just wanted to clarify my discrimination is probably not based on lack of taste on either part, but on the $5 speakers attached to our pc. The Bose just didn't make it into the budget.

Andy has a gift: he can make me want to listen to anything. Sometimes after he waxes rhapsodic about an indie-rock album, I'll hear some of it and conclude that Andy had the wrong kind of mushrooms on his pizza. But we do have more in common when it comes to roots music. So Andy has found you another fan. And a roots guy who once roadied for Chagall Guevara? How could it get better than that?