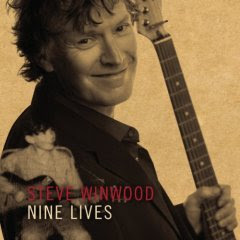 Quite honestly, I don't expect much from my '60s rock 'n roll heroes. With the exceptions of Bob Dylan and Richard Thompson, who still manage to surprise me from time to time, most of the artists who made me care about rock 'n roll in the first place are either dead or have been coasting since the Nixon administration. Paul McCartney? That 1970 solo debut album was really something. And that's about the best I can muster. Van Morrison is hit and miss (and entirely miss on his latest Keep It Simple), Eric Clapton only emerges from his now three-decades-long lethargy about once every ten years or so, and John Fogerty keeps on chooglin' while pandering tired Summer of Love nostalgia.

So I really don't know why I bothered to pay attention to Steve Winwood's latest, Nine Lives. I loved those early Spencer Davis singles. I loved those Traffic albums, but everybody loved those Traffic albums, and that was a long, long time ago. The first few solo albums from the early-to-mid '80s were decent, but they weren't Traffic. And then I stopped paying attention. Nine Lives is the first new Winwood material I've heard in more than twenty years. And I take it all back. There is at least one '60s dinosaur out there who is making music that can stack up just fine with his classic material.

Last time I checked, Winwood’s music was being used as the backdrop for Michelob commercials. It was slick, glitzy, synth-driven pop, and it was the perfect accompaniment to nighttime video shots of the Manhattan skyline. Nine Lives sounds nothing like that. It’s a jamband album, a la the Traffic classics The Low Spark of High Heeled Boys and John Barleycorn Must Die, and, like all jamband albums, its biggest drawback is the absence of discernible hooks and singalong choruses. But look, if you’re going to go in for seven-minute jams, who would you rather listen to, boring young Dave Matthews or the suitably ancient but surprisingly frisky Steve Winwood? And how about if we brought along Eric Clapton – a totally resuscitated Eric Clapton at that – to play guitar? Is this sounding like a better proposition now? Because that’s what Winwood has done. It’s Son of Blind Faith, with some Latin rhythms and occasional sax and flute solos thrown in for good measure.

Winwood’s bluesy, soulful voice has lost none of its power, and the synths have given way to a much more organic sound dominated by Winwood’s Hammond B3 organ. It’s an admittedly calculated return to the past, and it recapitulates everything that was great about The Spencer Davis Group, Traffic, and Blind Faith. Sax/flute player Paul Booth ably fills the Chris Wood role in the band, and Winwood wraps his soulful pipes around, you guesed it, nine tunes that are surprisingly reflective and introspective. Best of all, Clapton shows up on “Dirty City” and unleashes his best guitar solo in at least a decade, a searing and yes, dirty, take on his patented blues playing. There are no hit singles here. Michelob won’t come knocking. But this is a warm, expansive slow burner of an album, and a welcome return to classic form.

Winwood released an album a few years back. It was on SciFidelity Records (The String Cheese Incident's label). I picked it up for nostalia's sake. My dad liked Traffic. I was very surprised by this album at the time...jammy, lost of Hammond B3. I read that the soloing done by Clapton on this album is some of the most lively he's done in a decade or so. I may just have get this album as well.

Very eager to hear this. Winwood is one of the most soulful performers. Though I wouldn't argue with your assessment of his 80's & 90's output, you should check out About Time - Very good stuff. Enjoy.

Winwood released "About Time" in 2005. It had the same feel as you describe, without the Clapton. I'll look for this one too thanks.

Hi Andy..I do not have an email address for you thus why I am asking you this on your blog..my sister Marianne Kesler is a singer songwriter travels some and has about 5 cd's i think out..can she send you the latest cd to see what you think please....my email addreses is riggsli@sbcglobal.nt

Huh.
This escaped my attention before now. I'll have to look it up. Winwood has one of my favorite voices, and I can't turn down B3 playing.