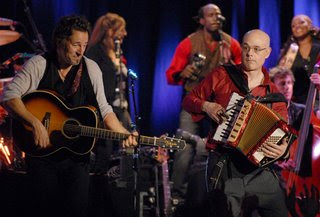 Danny Federici, longtime keyboard player in Bruce Springsteen’s E Street Band, died of melanoma yesterday. He was 58. I have a DVD of Springsteen and his band that was recorded in Los Angeles in 1973, when Bruce was just starting out. Danny Federici looks like he’s about 12 years old. Neil Young told us a long time ago that was it better to burn out than to fade away, but he was wrong, and thankfully wrong about himself as well. Nevertheless, it’s unsettling to encounter news like this, to find that the guys who manage to escape the car and plane crashes and the drug overdoses still succumb to the much more mundane, prosaic ravages of cancer and heart disease at the other end of this tunnel of love.

Sandy, the waitress I was seein' lost her desire for me
I spoke with her last night, she said she won't set herself on fire for me anymore
She worked that joint under the boardwalk
She was always the girl you saw boppin' down the beach with the radio
Kids say last night she was dressed like a star in one of those cheap little seaside bars,
and I saw her parked with her lover boy out on the Kokomo
Did you hear the cops finally busted Madame Marie for tellin' fortunes better than they do?
For me this boardwalk life's through
You ought to quit this scene too

Then Danny comes in with that sweet, romantic accordion, turning the dives along the Jersey Shore into cafés on the Left Bank of the Seine. He quit the scene yesterday, but I’m hoping there are greasy dives in heaven, and that they hire accordion players.
Posted by Andy Whitman at 10:42 AM

Thank you for your kind tribute.