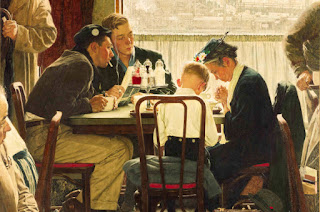 Lana Del Rey's new album "Norman Fucking Rockwell" is the perfect soundtrack for our MAGA times; an instagram of the apocalypse, as vapid and as revealing as a tweet from the presidential commode.

And life couldn't be better, you know?

They're still shootin' 'em up in Texas, boys; little 17-month-old kids, along with assorted men and women, so it was time to pass a new law that means guns for teachers and guns in foster homes and guns in churches. Thoughts and prayers. It had been a couple weeks, so Texas was due.

The hurricane's gonna sink the coast, but Disney's still open, and the stock market is tanking, but college football is underway, and you didn't really count on Social Security and Medicare anyway, did you, and the big election is still open to the highest foreign bidder, and no we don't need to reform a damn thing, and everybody's pro-life until somebody's born, and the Christian Church is in bed with racists, holy fuck indeed, and everywhere there is winning, winning, winning.

I miss Long Beach and I miss you, babe
I miss dancing with you most of all
I miss the bar where the Beach Boys would go
Dennis's last stop before Kokomo

And I'm wasted
Don't leave, I just need a wake-up call
I'm facing the greatest
The greatest loss of them all
The culture is lit and I had a ball
I guess I'm signing off after all

I miss New York and I miss the music
Me and my friends, we miss rock 'n roll
I want shit to feel just like it used to
When, baby, I was doing nothin' most of all

And I'm wasted
Don't leave, I just need a wake-up call
I'm facing the greatest
The greatest loss of them all
The culture is lit and I had a ball
I guess that I'm burned out after all

If this is it, I'm signing off
Miss doing nothin' most of all
Hawaii just missed that fireball
L.A. is in flames, it's getting hot
Kanye West is blonde and gone
"Life on Mars" ain't just a song
I hope the live stream's almost on
Posted by Andy Whitman at 1:04 PM