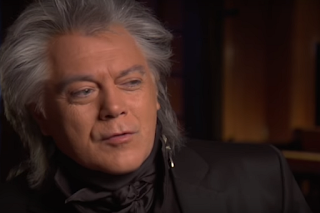 Ken Burns gets a lot right in his exhaustive, but never exhausting, country music documentary. The seven episodes (Episode 8, the finale, airs tonight) have been hugely entertaining and enlightening, admirably encapsulating almost a century of music, highlighting the obvious giants of the genre, and allowing plenty of room for the practitioners to wax nostalgic and/or philosophical on the brilliance of the music and the foibles of the people who made it. Special kudos to Burns for recognizing the genius of Marty Stuart and for allowing him to fill the Shelby Foote (The Civil War)/Buck O’Neil (Baseball) role as resident ranconteur and wag. Favorite moments: a) Stuart recounting the story of meeting beautiful country singer Connie Smith as a starstruck kid: “I told my mama after getting Connie’s autograph that one day I was going to marry her. Twenty-five years later, I did” and b) Stuart reflecting on his career: “The first two albums I ever bought as a kid were by Lester Flatt and Johnny Cash. The only two bands I’ve ever played in were led by Lester Flatt and Johnny Cash. So that worked out all right.”

I’m going to give it a solid “A” but still scribble a few notes in the margins of the paper. Specifically:

- Yeah, yeah, the Nitty Gritty Dirt Band, The Byrds and Gram Parsons, and Bob Dylan in Nashville. All hugely significant in terms of roping in the Boomer kids and convincing them that there might be merit in the hillbillies and hopelessly square Nashvillians (Nashvillains?). But aside from a glancing mention of The Eagles, you’d hardly know that country rock – as a musical and cultural movement – even happened. A few mentions of, and few notes from, Poco, Pure Prairie League, and early Linda Ronstadt would have been in order.


- Steve Earle? Where is he? Anyone? Maybe he’ll show up tonight in the final episode, but Steve was certainly around in the timeframe of last night’s episode, and if he goes missing from the entire documentary, I’m gonna cry Foul. Big miss, Ken.


- I appreciate the focus on Austin, and on Willie and Waylon, Guy and Townes, but there was a whole lot more going on as well. Ray Wylie Hubbard, Jerry Jeff Walker, Doug Sahm, Alejandro Escovedo, Joe Ely, Butch Hancock, and Jimmie Dale Gilmore all deserved at least a passing mention.

It’s all quibbling. Yes, I’d like to see those things, and yes, this documentary is superb.
Posted by Andy Whitman at 1:18 PM