Doubt is About as Good as a Heart Attack 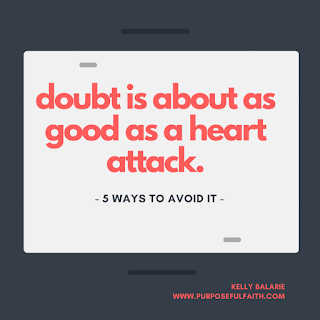 The quote from the photo comes from someone named Kelly Balarie, a self-proclaimed “Cheerleader of Faith.” Kelly herself looks like a cheerleader, perhaps now a few years removed from shaking pompoms on the sidelines, but still possessing that wholesome, All-American look that inspires superhuman feats of athletic prowess and giving it 110%.

I have nothing against Kelly, but I suspect she will experience life at some point, by which I mean that she will encounter inexplicable and devastating sadness and loss. It comes with the territory. If you haven’t experienced that yet, give it time. You will. And Kelly will experience it as well. When she does, I would like to interview her. Kelly would tell me today that the opposite of faith is doubt. I would tell her that the opposite of doubt is certainty, not faith, and that doubt, in the words of writer and theologian Frederick Buechner, is the ants in the pants of faith. If I didn’t doubt, I wouldn’t need faith.

I think about this because I spent a significant portion of my adult life in churches that exercised Cheerleader Faith. A lot of the rah-rah clapping and general hallooing was intended to drive away doubt. People would wander in after a tough morning of dealing with snot-nosed, sick kids, or wondering how they were going to pay the bills, and they would be hit by half an hour or so of bright, upbeat sentiments like these:

I wandered so aimless, my life filled with sin
I wouldn't let my dear savior in
Then Jesus came like a stranger in the night
Praise the Lord, I saw the light

That’s an old Hank Williams tune, and I believe I’ve sung it in more than half a dozen churches. Hank, of course, ended up dead in the back seat of his car at the ripe old age of 29, which was and is a very sad and devastating loss, but hardly inexplicable. It’s what often happens when you mix morphine and bourbon. Whatever light Hank experienced – and I’ll take him at his word that he experienced the love of God – wasn’t enough to overcome the darkness. No sorrow in sight? Check with the grieving widow and the kids who lost a father.

I understand the sentiments of the song and the desire to provide uplifting words directed to God. To extend the cheerleader/athletic metaphor just a bit, someone should have immediately thrown a flag on the “now I’m so happy, no sorrow in sight” line and kicked the songwriter out of the game for heretical bullshittery, but I understand the basic concept of spiritual transformation and why it’s important. But the question of how one gets there, how one arrives at a transformed life, is important as well.

My wife and I had an extended conversation about five years ago that went on for many weeks. It was your basic “Let’s take stock of where we are” dialogue that I enthusiastically, nay, almost happily recommend for married couples. We couldn’t do it anymore. We couldn’t deal with “now I’m so happy, no sorrow in sight.” I literally couldn’t sing it because it was flatly untrue, and I wasn’t going to pretend that it was true. We were watching the fourth or fifth wave of new people come into our church, and stick around for a bit, and then leave. We were considering our aging bodies and witnessing every other Sunday as Kid’s Sunday, complete with balloons. And we were looking at the toxic changes happening in America and in the Christian Church in America, and connecting the dots, and concluding that we either needed to get the hell out of America or out of the Christian Church or both, and for the good of our souls.

As best I can tell, here is how a transformed life works: show up, confess your sins to God and one another, ask for help to stop sinning, acknowledge the reality of sorrow and loss, express your doubts, and live in hope, faith, and love. I see positive changes in people’s lives, including my own. It’s a quieter, less showy faith, although the pomp and circumstance would lead many people to suspect the opposite. But it is. It’s quieter. It’s less (melo)dramatic. It’s less prone to before and after thinking and more inclined toward process, which includes showing up, confessing your sins, and being forgiven, again and again and again, scraping away at the barnacles of the old, dead life. I’m pretty happy in the Catholic Church, at least the local expression of my parish. At this point (and I’m keeping all options open), I’m thankful I didn’t leave the country, and I’m thankful I didn’t bag it all and focus on crossword puzzles.

I also live with doubts. I like to think of it as being human.