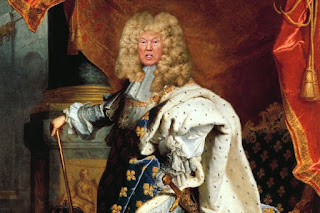 Francis Schaeffer, onetime Christian leader/guru and author, went to great pains to outline the differences between the way most of the world worked and the way America worked. America, Schaeffer maintained, was based on the notion of Lex Rex – the Law is King. That is, there were certain principles, underlying rules and assumptions, that superseded the whims and opinions of any one individual, no matter how powerful. This was in contrast to the way the rest of the world worked, and indeed how Western Civilization™ had worked up until the establishment of America, the shining beacon on a hill. “L’etat, c’est moi” pronounced Louis XIV of France. I am the state. In the old Latin phrase, Rex Lex. The King IS the law.

Yesterday provided an intimate glimpse of the way America really works. It wasn’t always this way. As recently as 1974, even Presidents were assumed to be subject to the laws of the land. Coordinate a burglary and you could be and would be impeached. I didn’t watch the testimony of Corey Lewandowski, Donald Trump’s former campaign manager. But from the transcripts I’ve read, his testimony went something like this:

Don’t be fooled. Rex Lex. Donald Trump is above the law. Welcome to Amerikkka.