Trickle Down, Way Back 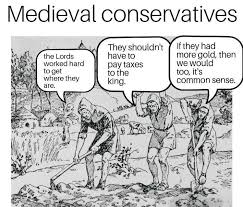 The recent PBS series on the Gilded Age of America (roughly 1870 to 1900) was illuminating. Unless you're an astute student of history, it's one of those eras that most Americans tend to gloss over. Lots of industrial growth, right? Railroads and steel mills and big banks, J.P. Morgan and Andrew Carnegie and the Rockefellers and the Vanderbilts. Lots of ostentatious wealth. Robber barons might be in there somewhere, too, which probably wasn't good. Waves of immigrants - the original wretched refuse and their teeming shores - doing the backbreaking labor to construct the Biltmores and the Breakers. Maybe some strikes and some union busting and some head busting. That was all part of it, too.

What I didn't know, and what was particularly interesting, was that trickle-down economics originated with the plutocrats of the 1880s and 1890s. All that newly generated wealth was supposed to find its way to the hands of the laborers. It didn't happen, of course. While Morgan and Carnegie became the richest men in the world, 20% of Americans were out of work. They lived through the worst economic depression that the country had seen, or would see, until the 1930s. But trickle-down economics was the campaign message of Grover Cleveland and William McKinley, and they convinced enough poor laborers to vote for them that they were elected President of the United States.

It turns out that Ronald Reagan (and many conservative American politicians after him) was preaching an old, old sermon. It was smoke and mirrors then. It's smoke and mirrors now because it discounts the fundamental greed and selfishness of human beings, and the role of government in enforcing a safety net that ensures that citizens - all citizens - will be fed, and housed, and provided with medical care, and supported through indigence and old age.

We haven't learned. Much of the rest of the world has. But we probably never will.
Posted by Andy Whitman at 6:36 PM