All the News Not Fit to Print 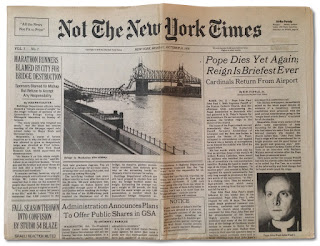 I periodically check in to State Media (TV and website) to see what's being covered. I do this because I've long maintained that State Media is its own private infotainment universe, pitched unerringly to the Cult, and that there would be no way to maintain the vicelike grip on the Cult if the three-way shuttle between White House staff, State Media reporters, and Dancing With the Stars contestants was ever interrupted by reports of what the rest of the world was talking about.

The news, of course, is very much up for grabs. This is how we've ended up with the parallel but diametrically opposed universes in which we now live and move and have our being. The news consists of not only whatever spin is given to the common stories shared by State Media and the rest of Planet Earth, but also in what is never covered at all; what is never reported and acknowledged as being newsworthy. And this week has been a doozy for what has not been covered by State Media.

Donald Trump tweeting reports by a wackadoodle conspiracy theorist that he is viewed as "The King of Israel" and "The Second Coming of God" and looking to the skies and proclaiming himself as "The Chosen One" a couple hours later? Non-news, according to State Media. Nada, to use a word sometimes spoken by immigrants that Donald Trump probably doesn't like. While the rest of the world was looking worryingly at Trump and conjecturing about Messiah complexes and mental illness (yes, the non-State Media is also sometimes given to hyperbole), State Media gave us sub-National-Inquirer stories entitled "Attorney Accused of Killing Man with Mercedes After Golf Ball Hit Car" and "Why a Woman Was Furious Her Sister-in-Law Gave Birth on Her Wedding Day." You have to cover something, I suppose. The Cult would simply never know that much of Planet Earth views the so-called leader of the free world as dangerous and unhinged. It simply wasn't news.

None of this should come as a great surprise. It's the same trend that has been evident for years. It was just particularly glaringly apparent this week. But if you can stomach it, I do recommend that you spend some time with State Media. It's a good lesson in how propaganda works, and how silence still speaks volumes. The question is, and always should be, "Can what I don't know hurt me?" The answer is still Yes.
Posted by Andy Whitman at 5:37 PM