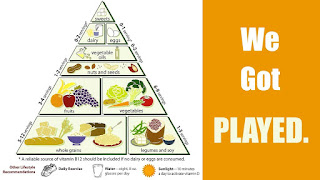 I am an expert in nutritional science in the same way that Donald Trump is an expert in political science. In other words, I'm winging it, and I don't really know a damn thing. But I wonder.

My wife, who would also tell you that she is not an expert in nutritional science, but who has nevertheless read a bunch of books on the topic, has convinced me to read *A* book. Just a single book. You have to start somewhere. And so I have. And while I'm not ready to spend all my hard-earned money on dietary supplements or subsist on kefir or douse myself with lavender before bedtime every night (pro tip: it does help with fart smells), I ... well, I wonder. Also, going into a diabetic coma at work can serve as a motivating factor. I'm just saying.

Growing up, I (and I bet you too) was exposed to the so-called Food Pyramid. Eat a lot of high-in-fiber grains, I was told. And fruits and vegetables. And while I probably received a C+ in the fruits-and-vegetables department, I was on board with the high-in-fiber grains. Bread was and is my friend. Cereal. Pasta. Maybe doughnuts, which had bad sugar, but also grain-like products. Yum. I liked them, and probably ate far too many of them, but I consoled myself with the notion that I was establishing a firm base at the foot of the Food Pyramid. Long live Ramses. Long live Andy.

Now I'm being told that the Food Pyramid had it all wrong, that I need to lay off the high-fiber grains and instead eats lots of fats (the basis of the Keto Diet), along with the aforementioned fruits and vegetables. Formerly, the fats would have been considered bad. But now I'm reading that the old Food Pyramid was the product of the USDA, which was funded and supported by farmers, and which funded many now-suspect studies in places like The New England Journal of Medicine. The argument now goes that the USDA had plenty of incentive (to slightly misapply a metaphor) to cook the books.

I don't know. But the notion of the federal government acting against the best interests of the people it serves in order to bankroll industry doesn't seem particularly farfetched to me. Anybody been paying attention to the news? In any event, the result is indisputable from a cultural standpoint. As a nation, we are out of shape and fat. Look, the old "four fingers pointing back at you" argument applies in this case, so I'm well aware that I'm talking about myself. But it's not just me. It's 32 million Americans - 10% of the population - with diabetes, a disease inextricably linked with diet. And while I would not deny that individual choices play a role here, I do think it's worthwhile to ask what role outside forces - let's just name the Food Pyramid, the choices the average American is faced with at the local grocery store, and the relentless marketing of crap food and drink for starters - have played in this process. We are being fattened up in the same way that the cows and chickens we consume are being fattened up. And yes, there's a slaughterhouse at the end of the process.

So I have some questions. Does the U.S. intentionally set up the people of the United States for failure? The failure, in this case, is the medical disaster that awaits most people if they simply follow what was prescribed for years and buy what is for sale at the grocery store. I think it's worth noting that the slaughterhouse at the end of the road is the U.S. healthcare industry, which rakes in trillions of dollars because Americans are fat and sick. Cha-ching. Follow the Benjamins. It's an old, old story.

I suppose it's also worth noting that we're now dealing with a government that salivates at the prospect of denying insurance coverage to those same old and fat Americans. American politicians and insurance companies call these things "pre-existing conditions." The rest of the world calls them living life and getting old. For many countries, this is a source of compassion and care. In the U.S., it's yet another way to make money.

Cha-ching. Feeling better now? I'm not. And I've only read one book.