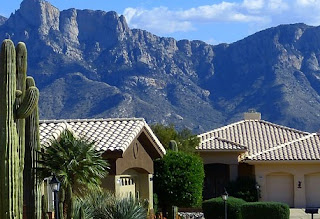 In the most wondrous, astounding news, my wife Kate has agreed to move with me to Arizona. You may recall that previously Kate was adamantly opposed to living in Arizona, although she did promise to visit me occasionally. This was less than ideal, and in turn led me to consider retirement options in Sarasota, Florida (nice and warm, but I’m not really a beach kind of guy) and Asheville, North Carolina (pretty mountains, cool cultural scene but, alas, WAAAAAY too much ice and snow). Now, miraculously, thanks to a late January trip to Las Vegas, which featured hikes through the mountains on a sunny 70-degree late January day, she has reconsidered, relented, and agreed to live with me. In Arizona!

My top retirement destination was, is, and always will be Oro Valley, Arizona, just north of Tucson. It really does look like the photo. It’s gorgeous. Warm, nay hot for four or five months per year. That’s a feature, not a bug. Equivalent cost of living to Columbus, Ohio. Surrounded by five mountain ranges. Two national parks (okay, one is called Saguaro National Park West and the other is called Saguaro National Park East) on either side of town. Far away, but that’s why God invented airplanes.

Speaking of bugs, basically everything in Oro Valley, Arizona wants to kill you. Black widow spiders. Scorpions. Tarantulas. Gila monsters. Rattlesnakes. These nasty wild-boar-like creatures called javelinas that like to hang out in back yards and poolside and charge you with their bristly tusks. It’s all true. Nevertheless, about a million or so people live in the Tucson area, and the great majority of them appear to survive from year to year. I’m willing to take my chances.