Labels and How to Use Them 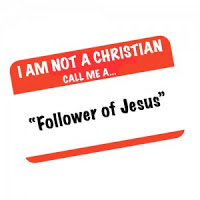 Here’s a curious one: “Christian.”

It’s always been notoriously slippery; prone to dispute and contention. Within a few decades of the death and resurrection of Jesus, one bunch was insisting on a close doctrinal and lifestyle relationship with Judaism, while another bunch was insisting on a radical reinvention. The first few centuries of the history of the Christian Church were characterized by doctrinal disagreement, and some seven Church Councils attempted to nail down definitive statements about the nature and substance of God the Father, God the Son (AKA Jesus), and God the Holy Spirit, and their relationship together, complete with mutual anathemas and excommunications, depending on which side one happened to land. Before the official Reformation, courtesy of Martin Luther, the eastern and western Christian Churches headed in very different directions, with very different emphases. Luther’s revolution in the Western Church, in turn, led to several Protestant splits, with at one time Lutherans pitched against Catholics and Reformed (as the Swiss defined it) Presbyterians, with all of them opposed to the poor, peace-loving Anabaptists, of whom Menno Simons (founder of the Mennonites) was a representative scapegoat. We haven’t even made it to the Russian communists or the (Im)Moral Majority/Minority or the televangelists at this point.

So it’s a mess. It’s always been a mess. The word “Christian,” since roughly Day 1, has always been in great dispute.

Currently, the Evangelicals are splitting from the other Evangelicals, and that’s a mess, too. But this is what happens when two groups are using the same label but they mean diametrically different and opposed things. Something has to give. I’m seeing this from a skewed perspective, one made up of people who at one time would have identified themselves as Evangelicals, but who never, ever meant that in the way that the term is now defined in the halls and the (k)naves of power. The people I know have given up the offending and offensive label. “You can have it,” they’ve basically told their MAGA-loving brethren. “But we get to keep Jesus.” This is either arrogance or spiritual clarity and discernment, your pick. Sometimes they don’t call themselves anything at all. Many of them have stopped going to church, but still claim to pray and desire to follow Jesus. Others, continuing more or less as before, continue to hang out and pray and worship together, but call themselves “Jesus Followers.” The concept of “church” is a little iffy for these folks, too, mainly because of how that label has been hijacked as well, but for all intents and purposes these folks still function as a church.

I don’t know how this is going to work out. Some days I find some hope in the notion that Boomers like me, of whom I hope I am a non-representative sample, will be dead in 20 years, and that the kid Jesus Followers, who have overwhelmingly rejected the halls and the (k)naves of power, will be left to carry on for, one hopes, Jesus. The Church – the real one, whether people want to identify with it or not – has faced all manner of shit before and carried on. I suspect it will do so again. If or when that happens, the kid Jesus Followers will need to come up with a label for themselves. Here’s one I like: “Christian.” Take it back and use it well.