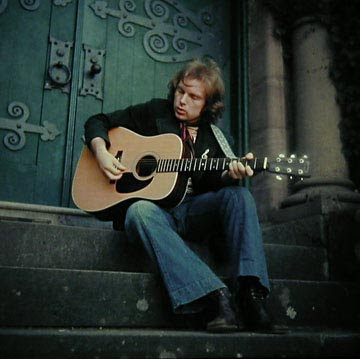 Rock critic Greil Marcus has a new book called When That Rough God Goes Riding: Listening to Van Morrison. True to its title, it's a book that is not so much about Van Morrison as it is about a fanboy geek and articulate journalist who spends a lot of time listening to Van Morrison. I find a kindred spirit there. I spend a lot of time listening to Van Morrison, too. More than any other singer, Van can jolt me to life, reinvigorate an ordinary, plodding day when nothing exceptional is happening, and remind me that all of it, every crawling second of it, matters. It's the sound of the yarragh -- a cry of the heart, a haunting and haunted sound that can be found in Celtic (and particularly Irish) song and poetry. It's sorrow and lamentation for what has been lost, and for centuries of foreign oppression. It's anger and self-righteousnessness, a loud and belligerent cry that insists on the inherent dignity and worth of a people. In short, it's soul, but soul with a particularly nationalistic fervor. And Van Morrison has it in spades.

This is the way Marcus puts it:

"Van Morrison's music, as I hear it, holds a story - a story made of fragments. There is in his music from the very first a kind of quest: for the moment when the magic word, riff, note or chord is found and everything is transformed. At any time a listener might think he or she has felt it, even glimpsed it, a realm beyond ordinary expression, reaching out as if to close your hand around such a moment, to grab for its air, then opening your fist to find a butterfly in it."

That's an apt description of some -- but by no means all -- of the music of Van Morrison. For all intents and purposes, he's been invisible to most music fans since 1975 or so, ever since he stopped trying to make hit records, or the whims of popular taste contributed to his popular decline, take your pick. But Van Morrison is an automatic purchase for me because, like Dylan, he can turn out all manner of perfunctory, insipid music, and then, out of nowhere, drop an absolute masterpiece. Marcus' book title is a case in point. It's taken from a Morrison song that appeared on an early '90s Van album called The Healing Game. Virtually no one bought the album. It's a mediocre album, as Van's later efforts tend to be, and yet it contains one of his greatest, most hair-raising songs. "Rough God Goes Riding" is a true yarragh moment, one of those incandescent times when Van moves from professional R&B singer to someone who channels angels and demons. There are very few singers in any genre who can do this. I'm fairly certain Van can't conjure it at will, and I'm equally certain that the vast majority of singers can't even approach the celestial heights. But when he nails it, as he does on that song, he is the greatest, most soulful singer that rock 'n roll has ever produced. Too much of it and I start levitating up near the ceiling. And then my wife calls me down and tells me it's time for dinner. You don't want to overdo it.

As a footnote, I think it's also worth noting that Van, like Dylan and Springsteen, is also capable of leaving masterpieces in the can, unreleased for decades. His 1998 compilation The Philosopher's Stone, a 2-CD set of previously unreleased outtakes and throwaways from the '70s, contains another yarragh moment, the gorgeous "Contemplation Rose." Whenever someone asks me what the big deal is about Van Morrison, I alternate between playing "Listen to the Lion" and "Contemplation Rose." Then I sit back and wait for the mouths to gape open.
Posted by Andy Whitman at 9:02 AM

I couldn't agree more with everything said. And the Healing Game is, to this day, still one of my favorite albums. Not much can move me as Morrison does.

I know this wasn't the point of your column, but what about that trilogy of albums "Astral Weeks", "Moondance" and "His Band and Street Choir". The only other three in a row that match those are "Music From Big Pink", "The Band" and "Stage Fright". We were blessed with great music around 1970.

Wow, I could hardly agree more. I have been haunted by "Contemplation Rose" since I first heard it in '98. JHL