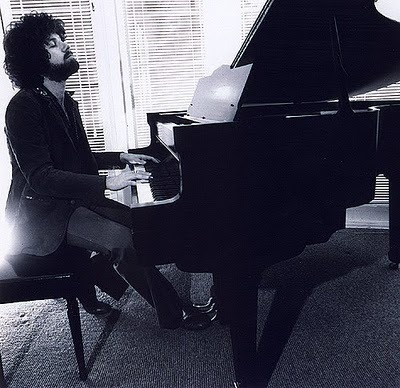 Nearly 30 years after Christian-rock pioneer Keith Green died in a plane crash, his widow and a Hollywood producer have teamed up to bring his story to the big screen in the hope of introducing a new generation to his music. . . .
Melody Green is working with producer Mike Leahy to make a movie version of her book "No Compromise: The Life Story of Keith Green."
Leahy has been involved with a number of Hollywood projects over the past 20 years, including "The Prophecy" starring Christopher Walken and "Infinity" directed by Matthew Broderick. But this is the first project for the production company he formed with his wife, Lori, to make films with a spiritual or social message.
They hope to start shooting later this year, and release the film in 2011. . . .
Daily News, May 17

I was never much of a fan of Keith Green's music, but the influence of his music and his ministry was undeniable for Evangelicals in the '70s. So there is a small part of me that is fascinated by the notion of a biopic.

Frankly, a lot of what Keith Green represented just sort of creeps me out now. I certainly don't question his faith and his utter commitment to Jesus. As far as I know -- and as is widely attested -- both were beyond reproach. But I question his methods which, in some ways, were the quintessential '70s CCM strongarm tactics. I found his concerts, in particular (of which I witnessed two), to be manipulative, guilt-inducing sermons that were interrupted by occasional musical interludes. I saw a bunch of people surge toward the stage at each concert, convicted and/or driven forward like sheep by lyrics like "Jesus rose from the dead/And you can't even get out of bed."

It was an effective approach, I suppose. But I do question the long-term value. Keith, perhaps more than any other CCM "star," was caught up in the hubris of the whole "last generation" theology that he espoused so fervently. It turns out he was wrong. The Church, in fact, had been around for 2,000 years before he arrived on the scene, and it's still going, now well over a generation after his passing. He was, ironically enough, a product of his time. His music bears the unmistakeable stamp of late '70s CCM CheeseWhiz. And his theology bears the unmistakeable stamp of the Jesus Freak generation that was convinced that, after 2,000 years, somebody had finally gotten it right. He is, in many ways, a tragic figure, and not only because of the way he died. Part of me would like to see this movie. And part of me has absolutely no desire to relive those crazy days in any way.
Posted by Andy Whitman at 1:38 PM

I always thought of him as a sort of musical, OT prophet. Odd to have such in a NT age, so perhaps he was more like John the Baptist. And you have to admit, a lot of the Church in that era would far rather have stayed in bed than deal with the poor, the starving, the druggies, the heathens, the pimps, the hookers, or even the rock and rollers.

He just went for it. I could relate to that, and really appreciated his zeal.

Keith was authentic; he meant it. When people really did start to repent, he tended to either just worship, or shut up, hide and pray.

He was also teachable. He was learning more about grace and toning it down when he died.

I still like some of his music (and musical sermons). Some of it I don't really much care for any more. But I miss him.

For Him Who Has Ears To Hear, Keith Green's debut release, is pretty awesome, though (you just don't argue with Mr. Zimmerman...)

http://www.allmusic.com/cg/amg.dll?p=amg&sql=10:djftxq95ldse
All Music Guide about Keith Green's So You Wanna Go Back To Egypt (1980): Bob Dylan was a friend and fan of Green's during the folk superstar's period of fascination with Christianity, and he plays harmonica on this record. While taping those tracks, Dylan remarked that Green's first album, For Him Who Has Ears to Hear, ranked among his favorite records of all time

...did Bob Dylan ever play on any other CCM release?

Bart was a big fan in his earlier years, particularly during the zealous phase. In reflecting back, the Wang senses that Keith got stuck in an immature stage for some time but was, according to accounts Bart has read, coming through that. Not unlike Malcolm X's growth before his murder. Bart imagines everyone will one day (in this life or the next) wake up, shake their head and think, "Wow. I was WAY off." The Wang still can get tears from 'When I Hear The Praises Start', though.