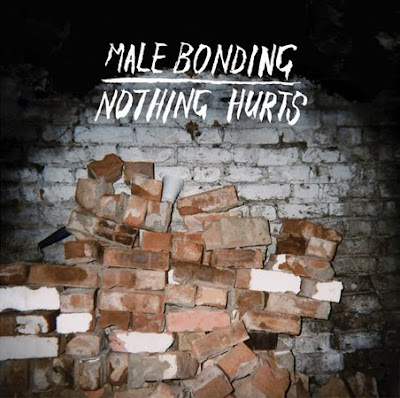 I have a soft spot for adolescents who like to make loud noises with guitars, and it dates back to when the slightly older and infinitely cooler Ricky Boles and his bandmates used to practice in the garage down the street from me. Ricky, like these Male Bonding kids from London, wasn't a particularly good musician. But it didn't matter. Ricky played long before "punk" became a musical marketing label, but he was a punk just the same, and he bashed out chords as fast as he could, and his drummer slammed into the choruses, pummeling his cymbals and whomping on his foot pedal to make the bass drum go boom, boom, boom, and the quiet suburban idyll of Gahanna, Ohio was utterly shattered, transformed into the Hollywood Bowl, or wherever else Ricky and his teenaged fantasies took him.

Male Bonding sounds a lot like Ricky Boles did. Too murky and feedback-laden to be considered power pop, too hook-filled to be considered pure punk, they occupy the middle ground where garage bands have flourished for fifty years. There's a little bit of the early Who here, a little bit of the late '80s/early '90s slacker guitar heroes J. Mascis and Kevin Shields, a little bit of the lo-fi Kiwi pop of the early Flying Nun records, a whole lot of Kurt Cobain. There are thirteen songs on Nothing Hurts, the debut album, and they dispatch them all in about half an hour. They bleed into one another, as if that hyperactive drummer can't stand to be still for a second. The vocals are buried so deep in the mix that it's impossible to tell what lead singer/songwriter John Arthur Webb has on his mind, but it probably doesn't matter. He has the Hollywood Bowl on his mind, or, more likely, The Cavern Club, or any number of other legendary, dingy basements where rock 'n roll history is made. This is a fabulous debut, the kind of jolt that ought to scare all the pasty-faced kids in their bedroom studios, just as it always has.
Posted by Andy Whitman at 9:00 AM

Heh -- I probably wouldn't end up buying the album because I own plenty of this kind of music already, but I enjoyed it vicariously through reading the review ;-)